"Floyd's" at the Guthrie Theater 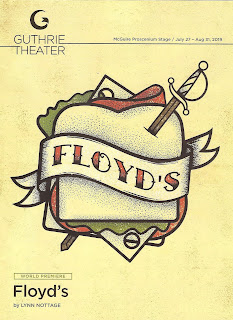 I interrupt the constant Minnesota Fringe Festival coverage to bring you a world premiere new play by Lynn Nottage, the only woman to win two Pulitzer Prizes for drama, commissioned by and debuting at the Guthrie Theater. Floyd's is a sort of follow-up to one of her prize-winning plays, Sweat, which I saw on Broadway in 2017 and look forward to seeing at the Guthrie next summer. For both plays, Lynn and frequent collaborator, director Kate Whoriskey, interviewed people in Reading, PA, a town thrust into poverty at the closing of a steel mill in 2008. Sweat deals directly with that issue, and is as devastating as it is true to American life. Floyd's is a bit lighter, perhaps not exactly a comedy, but it focuses more on the healing and moving on of people coming out of prison (including one of the characters from Sweat). With crisply drawn characters beautifully brought to life by the strong five-person cast (three of whom appeared in Sweat on Broadway), Floyd's is a funny, surprising, moving, and very human play.

Floyd's is set in a truck stop sandwich shop that employs people recently released from prison, who might otherwise have a difficult time finding employment (see also the real-life local grilled cheese restaurant All Square). It's run by the tough-talking Floyd (Johanna Day), who doesn't treat her employees very kindly, has no time to appreciate a well crafted sandwich, and may be in debt to some bad people. Montrellous (John Earl Jelks) is the veteran employee of the group, and something of a sandwich master. Single mother Letitia (#TCTheater favorite Dame Jasmine Hughes making her Guthrie debut) and recovering drug addict Rafael (Reza Salazar) are joined by new employee Jason (Andrew Veenstra), which shakes things up a bit. Each one of these employees has a life story that's only hinted at; we get just a brief glimpse at their lives and how they ended up in prison - anger issues, trying to protect loved ones, or addiction (if you want to know how Jason ended up in prison, be sure to see Sweat next summer). But it's enough to make them feel like real people, with real problems, hopes, and dreams. Not a lot happens, other than getting to know these complex, fascinating people and their relationships.

The 95-minute show is tightly and clearly directed by Kate Whoriskey, with story continuing even through scene transitions, keeping the momentum moving. Lynn Nottage's dialogue feels real, and is often funny as well as poignant. She notes in one of the many great articles in the program, "With Sweat, I wanted to dialogue on an immediate, political, and visceral level. With Floyd's, I wanted to dialogue on a spiritual and emotional level." The cast is consistently strong and believable in their roles, and impressively make actual sandwiches with actual food and perform other tasks throughout the play. One of the employees' favorite pastimes is to try to impress each other with new sandwich ideas, which will leave you craving a sandwich.

The entire story takes place in the kitchen of the sandwich shop, represented by the detailed and realistic set (designed by Laura Jellinek, who also designed the fun, rustic, and interactive set for the brilliant new Oklahoma! revival currently on Broadway). Working equipment is everywhere, and the food preparation stations are fully stocked. In my front row seat, I could smell the chopped green pepper and the hot oil on the stove, which only increases the sense of realism (and the craving for a sandwich). The character specific costumes (designed by Jennifer Moeller) really tell you who these people are, especially Floyd's array of boots, tight pants, graphic tees, jackets, and blingy jewelry.

Floyd's isn't that much longer than a Fringe show, so break away from the wonderful madness of the festival to see this smart, funny, relevant new play - only in Minneapolis! Or wait until after Fringe, it continues through the end of August.

I now return you to my continued Minnesota Fringe Festival coverage, which for me will include a date with my favorite sandwich - the VLT (Herbivorous Butcher hickory smoked vegan bacon, tomato relish, house made vegan mayo, french bread) at The Sheridan Room next to the Ritz Theater.