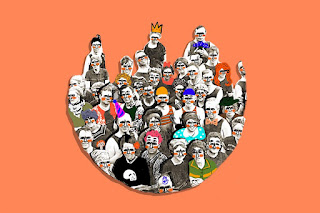 Summary: A doomsday cult of unknowing can't remember how to achieve the final goal because they forgot everything, including how to read.

Highlights: "The world is really really loud and complicated," says the cult propaganda flier passed out before the show. So true, and maybe that's why humans are so susceptible to religions that tell us how the world works and promise us that things will turn out OK, even the weird extremist religions that we call cults. Sheep Theater takes this idea and runs with it, with their typical "deranged sincerity," in a new work written by Joey Hamburger and directed by Michael Torsch. Four members of a cult (Erika Kuhn, Jacob Mobley, Joey Hamburger, and Madeleine Rowe) are convinced that their leader (Robb Goetzke at his creepiest) has died/disappeared/ascended to "the five stones in the sky," so they perform the final ritual. Which includes preparing an elixir (obviously poison, a la The Peoples Temple) that they don't realize they need to drink. When they don't ascend, they get desperate and look for help from a possible new leader (Kyle Munshower) and a crisis counselor (Iris Rose Page). Wacky things continue to happen (including a pretty brilliant power point presentation), but it's funny (and scary) because it's true. The story unfolds in one long scene that gets more and more desperate and almost a little sad as as these people's deluded dreams are shattered. A Cult Classic is a very Sheepy, very Fringey absurd comedy.