Minnesota Fringe Festival 2019: "The Buttslasher: And Then There Were Buns" 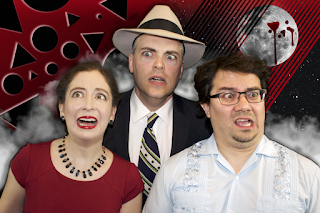 Title: The Buttslasher: And Then There Were Buns

Summary: A sequel to the 2017/2018 Fringe hit Buttslasher, about the infamous criminal of Stillwater and the detective who hunts them.

Highlights: If you saw the original, you're in for more of the same cheeky fun here (pun intended). But don't worry if you didn't see the first one, this is a "stand-alone sequel," in which our hero Detective Heck Bills (once again perfectly portrayed by Glen L. Dawson) is invited to a dinner party at which the guests keep dropping - slashed in the butt. Even though Heck solved the crime in the last show, it seems our serial Buttslasher has returned to the dangerous town of Stillwater, or maybe has turned into something even worse - an ass-vampire (which is the set-up for the best/worst pun in the show, "hot cross buns"). The plot is a little convoluted (including deceased wealthy urinal cake tycoon Harry Backside and a senator jailed for slug fighting), but the puns come fast and furious, and the cast (Al Fiene, Cayla Marie Wolpers, Harry Lantto, Joy Rakerd, Thalia Kostman, and Varghese Alexander,) is great fun as they portray these noir-ish characters (and Thalia's mime is, as they say in the show, a delight). I could watch a new episode of Det. Heck and the Buttslasher every year, they really go all in with the theme of mocking yet paying homage to the noir genre, with as many silly puns as possible.