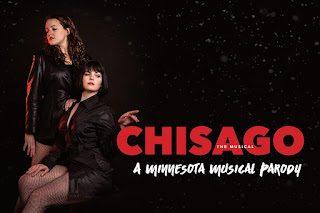 Summary: A parody of the musical Chicago set in Chisago City, MN and stuffed full of Minnesota references.

Highlights: It's not the Fringe without a few Minnesota references, and this one fulfills your quota, and then some. The original lyrics set to the familiar Chicago score are extremely clever, referencing everything we love (and love to hate) about Minnesota - the cold, lutefisk, Caribou Coffee, the Twins (#gotwins!), hotdish, bars, and on and on and on. Yes it's an easy target, Minnesota audiences love Minnesota references, but they even created a story that ties all of the songs together quite nicely. Roxie (co-creator Kendra Braunger) moves from Orlando to Chisago when her husband Amos (Keith Steinke) is transferred, and her guardian angel Paul Bunyon (Tyler Christenson) helps her learn how to be a Minnesotan, culminating in a visit to the State Fair with Velma (co-creator Carissa Christenson). I almost put this show on my must-see list, but didn't because it sounded like one of those things that could go either way. I am now putting it on my must-see list post hoc; this team of first time Fringe producers and unknown-to-me actors have done a fantastic job (including choreography by Kelsey Chester, and costumes - black fishnet stockings under winter coats) with this very Minnesotan musical theater parody. Of course I have to take off points for singing along to recorded music (what I assume is the Chicago karaoke track) instead of having live musicians. But other than that, this show is a Fringey Minnesota musical delight. And no one gets murdered!