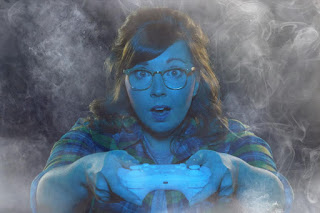 Summary: A new original musical about Edith, whose favorite pastime is getting high and playing video games, until she's sucked into a game that feels a little too real.

Highlights: I love Keith Hovis' Fringey musicals, and this one is no exception. But it feels a little different - a little more focused, a little less gruesomely violent, with some physical theater elements (thanks to director Allison Witham of Transatlantic Love Affair). Edith is one of "Four Women Getting High Playing Video Games," including her fiance Ari and a couple of online friends. She gets perhaps a bit too high, and imagines herself inside of a video game in which she has to save Ari, battling imaginary foes as well as a very real troll. The original songs are clever and tuneful, reminiscent of previous Hovis musicals but with some video-game-sounding elements. This fantastic cast is as good at the comedy as the musical parts of the show, starting with the always wonderful Deb Berger as our hero Edith, with a strong and hard-working supporting cast (Cameron Reeves, Colleen Somerville Leeman, Kiko Laureano, Lizzie Gardner, and Ryan Lear) playing multiple characters. There is one unfortunate line, something about how video games makes killing people fun, that is a bit awkward in light of recent events. But on the whole it's a really fun, well-written, brilliantly performed Fringey musical. Recommended to reserve a seat in advance on the Fringe website, or get there early to snag one of the 30% of seats that are held for walk-ups.