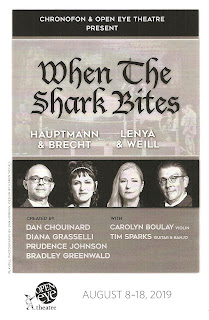 The team behind the musical historical revues of Leonard Bernstein and Jacques Brel, among others, now turns their talent for crafting a well-told historical story with music to the famous German music-theater team of Kurt Weill and Bertolt Brecht, along with their lesser known female collaborators (and sometimes romantic partners) - actor Lotte Lenya and writer Elisabeth Hauptmann. These women were not only muses, but especially in the case of Hauptmann, made important uncredited contributions to their work (see also the excellent FX series Fosse/Verdon). But thanks to Chronofon Productions (aka Bradley Greenwald, Dan Chouinard, Diana Grasselli, and Prudence Johnson), these women are now known and recognized, at least by those of us lucky enough to be in their sold-out audience over the short two-week run. The show closes today, but follow Chronofon's Facebook page for the latest on upcoming performances of these highly entertaining and informative historical musical revues.

As in their past work, Chronofon has constructed a 90-minute story based on historical writings (compiled by Bradley), some read by the cast and some projected onto a screen, along with performances of the relevant music. The main works featured are Weill and Brecht's most well-know creation, The Threepenny Opera (in which Bradley played Macheath in Frank Theatre's production five years ago), Rise and Fall of the City of Mahagonny, and Happy End (for which Hauptmann wrote the book under a pseudonym). Arranged by Dan and performed by him on piano along with Carolyn Boulay on violin and Tim Sparks on guitar and banjo, sung by the Chronofon quartet, the music is a treat. Most of it was unfamiliar to me, but I enjoyed experiencing and learning more about these artists' work. The English translations are primarily used, but we do get to hear (or read on the projections) some of Brecht's original German lyrics (listening to Bradley Greenwald sing, and speak, in German is one of my favorite things!).

As is also often the case in Chronofon's shows, When the Shark Bites also delves into the politics of the time and how it affected the artists. Most of this team's collaborations occurred during the Weimar Republic era of post-WWI Germany, a time of relative artistic freedom and creativity, although with increasing social and political ills. This era ended with the rise of Nazism in the 1930s, with rhetoric of nationalism and blaming the "other" that's eerily similar to what we hear all around us today. Weill was the only Jew in the group so he wisely got out of there while he could, but as artists who spoke out against what they saw as wrong, they were all in danger from the Nazis and fled Germany in the early '30s, eventually arriving in the US to continue their work, although mostly separately from then on. The arts and politics are intricately related, and Chronofon lets us see those connections and how it relates to the current day without being heavy handed about it.

The best thing about Chronofon's creations is that not only does the audience get to hear the work of an artists or group of artists, beautifully performed by this troupe, but we also get to learn more about their lives, often through their own words, or the words of those who knew them. This show in particular is valuable for shining a light on the women who helped make these men a success. Hopefully the days of "behind every great man is a great woman" are behind us, and women are able to stand in front and be recognized for their contributions to the world, but it's important to remember the women of the past who weren't given that opportunity.