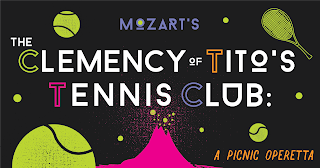 Combine classic opera, pop music, and tasty treats made from freshly harvested veggies, and what do you get? Mixed Precipitation's annual picnic operetta. This year, Artistic Director Scotty Reynolds, with help from Music Director/ Arranger/ Conductor Gary Ruschman, has adapted one of Mozart's last operas La Clemenza di Tito, setting it in a tennis tournament and adding '80s pop songs. A talented cast of professional opera singers and adorably enthusiastic children present this unique creation in about 75 minutes in the great outdoors. Even when some actual precipitation causes an unplanned intermission and move underneath a park pavilion, the experience is a one-of-a-kind delight. This intrepid company travels around the state performing at parks and gardens; click here to find a location near you.

Wikipedia tells me that the opera was commissioned to "to promote the reactionary political and social policies of an aristocratic elite." This adaptation has moved the story to that of rival tennis coaches plotting murder. Mixed Precip's website summarizes it thusly:


In this adaptation of Mozart's opera, a rag-tag group of players is resurrecting a defunct tennis club. But backstabbing, bitterness, and a murderous revenge plot threaten their rise to the top of Rome's championship match. Will they find redemption before Mount Vesuvius covers them in ash? When can cheaters be forgiven? All is presented with the Picnic Operetta’s trademark style of playfulness, satire, and hope. Classic arias and duets from Mozart's La Clemenza di Tito soar across the garden alongside new wave and synth-pop hits by Devo, Berlin, Yaz, and Pat Benatar. Our operatic athletes will serve the audience some fresh edible bites as well.

Basically, Sesto (Anna Hashizume) is in love with Vitellia (Lauren Asheim), who is upset that Tito (Jim Ahrens) is the new tennis coach of a team that includes stars Servillia Jean King (Joni Griffith) and Annio Armstrong (Jen LeDoux filling in for KT Magnolia the day I saw the show). So Sesto plots to kill Tito and destroy the tennis club. Events are cleverly narrated by a couple of sports reporters (played by Gabe Salmon and the young Julia Chelimsky). After the botched attempt on his life, Tito has to decide the just punishment for Sesto, hence the title, in a lovely demonstration of forgiveness - a wonderful thing to practice in ancient Rome and in present day Minnesota.

The program, which doubles as a fan for the hotter days, has handy scene and song descriptions to help follow along. Dialogue and pop songs are in English, while the songs from the opera are in Italian with the general gist of the words charmingly translated on signs. Costumes (designed by Rhiannon Fiskradaatz) are fun and bright '80s workout gear, and set pieces (designed by Duane Tougas) are minimal, leaving the talented cast to tell the story amidst the natural setting. All of these disparate elements could be a mess, but it really all flows together well, and the bottom line is fun, energetic performances by the entire cast, beautiful music (performed by the ensemble and the lovely four-person multi-instrument orchestra), and food!

Periodically a character will reference a food that they somehow (more or less cleverly) work into the plot. Platters of small bites (all vegetarian, most vegan, with ingredients clearly listed) are then passed among the audience. The food is creative and interesting (prepared by Tracy Yue of One Dish at a Time), and the sharing of food just makes everything feel more festive. It's a unique, inclusive, and family-friendly experience, with several little ones in attendance. Although I did hear one of them ask, "why is there so much opera?" to which I hope their adult companion responded "because it's an opera, silly." As someone who's not the biggest fan of opera, I think it's just the right amount of opera.

The Clemency of Tito's Tennis Club: A Picnic Operetta continues through September 29 in various locations around the Twin Cities and in Greater Minnesota.