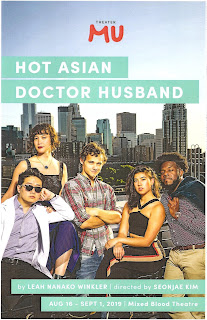 Theater Mu commissioned a new play from Japanese-American playwright Leah Nanako Winkler, author of the hilarious Two Mile Hollow seen in a Mu/Mixed Blood co-production last year, and the result is more hilarious and biting social commentary. Hot Asian Doctor Husband explores the journey of a young biracial woman who has an existential (and identity) crisis when her Japanese mother dies, and she decides she has to break up with her white boyfriend because she wants her children to look like her and her mom. It's a very smart, modern, and funny look at race, identity, stereotypes (see: title), family, grief, and love. NYC-based director Seonjae Kim and this brilliant seven-person cast (three of whom also appeared in Two Mile Hollow) bring out all of the humor and emotion in this exciting new script.

The play opens with a hilarious and heart-breaking scene in which Emi tells Collin that she can't love him anymore. She dreams of marrying a hot Asian doctor husband (HADH), and what luck - she soon finds one! Problem is he's already someone else's husband, but she projects all of her hopes and dreams on him despite the fact that he's a pompous jerk who wears a wedding ring and insists on meeting at a hotel instead of his place (red flag!). Emi's best friend Leonard is always there for her, but has relationship issues of his own, afraid to open up and commit to any of his many girlfriends, including current fling Veronica. Emi's grief soon overcomes her, and the play takes a turn into fantasy with an extended dream (hallucination?) sequence that gets a bit weird and windy. There are some beautiful moments in it as we finally get to meet Emi's mom, and her child self, but it slows down the momentum of the story. I wish the dream sequence were trimmed a little; the play is pushing two hours without intermission. But still, it's a worthwhile journey to go on.

The playwright utilizes several storytelling styles, from straight theater scenes, to tongue-in-cheek monologues (the HADH), to music and dance, to fantasy sequences. And this cast beautifully and bravely brings it all to life. I can't think of anyone better suited for the role of Emi than Meghan Kreidler, she's quickly become one of #TCTheater's best actors in the last several years. Her performance here is so natural, real, and relatable, equal parts funny and heart-breaking. Eric Sharp is perfection as the HADH, fully committing to every hair toss and sexy look over his shoulder in his monologues describing how wonderful he is, with a dance number that is insane. Damian Leverett is so sweet as Collin, you can feel the love and hurt. He's also written some original music (along with sound designer Katharine Horowitz) and sings a song about being a white man that could be offensive, but instead is charming in his hands. Mikell Sapp is a wonderful best friend, and he and Danielle Troiano (currently a student in the Guthrie/U of M BFA program whom I expect we'll be seeing a lot more of in the future) make the secondary couple of Leonard and Veronica just as compelling. Then we've got Sun Mee Chomet, who makes everything better, with a couple of cameos including Emi's mother, and 7th grader Maekalah Ratsabout as the young Emi. A dream team indeed.

The play is well-staged, including use of the space on the floor in front of the stage. But this can make sight-lines difficult if you're sitting on the floor; I recommend sitting in the riser section for a better view of everything.The set includes some beautiful cherry blossoms (a plot point in the play), and a couple of versatile pieces that transform with the scene location. Costumes are sharp and modern and really tell us who these characters are. (Scenic design by Sarah Brandner, costume design by Jeni O'Malley.)

Hot Asian Doctor Husband is a fantastic new play, and it's exciting to see it debut right here in #TCTheater. I can't remember the last time I laughed so much at the theater. But it's not only a fun summer comedy; it also takes a deep and fearless look at some pretty heavy topics. The show continues through September 1, but you might want to get your tickets now because shows are already starting to sell out. It's that good.