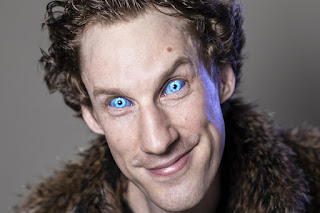 Highlights: I love Tom's pop culture parodies, even when I don't know the subject (see Hunger Games) but even more so when I do (see Stranger Things). Truthfully if you haven't seen Game of Thrones, or have at least a working knowledge of it, you might not get much out of this show. But for those of us who know and love the series (and perhaps have read the books several times), it's great fun. Tom takes us through the story, season by season, obviously leaving a lot out but hitting the high (and low) points - Ned's beheading, the Red Wedding, John Snow's true parentage. He narrates (with commentary on the good, the bad, and the naked) and plays multiple characters, each with a specific voice and body carriage, the story peppered with familiar songs with new lyrics (the Cheers theme song about how we don't know everyone's name, "Let It Go" sung by Daenerys as "Let It Burn," a fantastic Hamilton-esque rap). A red handkerchief represents every death discussed, so by the end of the show the stage is littered with handkerchiefs. Speaking of the end, Tom does a bit of improv based on audience suggestions for an ending that would be preferable to the actual ending of the show a few months ago, still fresh on fans' minds. Tom and accompanist Paul Kovacovic present a super fun and Fringey whirlwind journey through Westeros.