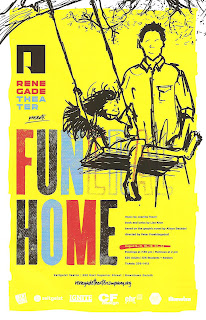 The 2015 Tony winner* for best musical, Fun Home, has been available for regional productions for a few years, and I've been anxiously waiting to see which of our many amazing regional theaters in Minnesota would be the first to produce it. I never guessed it would be Renegade Theater Company in Duluth. But I should have, this intrepid company in Minnesota's favorite vacation spot is the perfect fit with their intimate performance space, interesting and risky choices, and the surprisingly deep music-theater talent pool in Duluth. Whether or not #TCTheater companies are prevented from getting the rights to Fun Home because Renegade is doing it, I don't know. I only know that, according to Artistic Director Mary Fox in the post-show talk back, Renegade has been interested in doing this piece since they heard about it, so they asked, and were granted the rights. And I'm so glad they did, and I'm so grateful I was able to drive up to Duluth to see it on their sold-out closing weekend, because Renegade has beautifully brought to life this new, modern, funny, moving, gorgeous musical in a powerful and intimate way.

Fun Home the musical is an adaptation of the "graphic memoir" (read: comic book about her life) by Alison Bechdel (yes, of the Bechdel Test). But it's more than just a simple adaptation of Alison's story. The genius of Lisa Kron's book is that it's an adaptation of the process of Alison writing her book, constructed as a memory play. We go on adult Alison's journey with her as she remembers her childhood, now in the context of what she's learned about her family since then, trying to make sense of it all and come to some sort of peace with her family's tragedies, while putting it down in writing. It's an incredibly effective, engaging, and emotional way to tell the story that makes you feel as if you're living it. And it's a pretty incredible story at that.

As the story unfolds, we watch a present-day Alison writing her novel, a memoir of her life. Her memories come alive in front of her as she observes, comments, and sometimes interacts with them. She sees her child self, growing up in a seemingly happy family in the '70s with an actress mother and a teacher/funeral home director father. But something is off that young Alison can't quite grasp, and current Alison struggles to understand as she writes her book. Alison also sees her college age self realizing she's gay and coming out to her parents, only to find out that her father, too, is gay, living in the closet and causing complications and heartaches for his family (and himself) through all of the secrets and lies. This is not a happy-go-lucky kind of musical, but one that has moments of humor and moments of grief, sometimes inseparable, like life.**

On Renegade's tiny stage in Zeitgeist on Superior Street in downtown Duluth, Alison's drawing desk is tucked in the front left corner of the stage, practically in the audience, from which she watches her life unfold. The seven-piece band (led by music director Paul Christenson) is crammed behind a screen at the back of the stage, from which they make some beautiful music with Jeanine Tesori's gorgeous, complex, layered score. The stage is completely bare when the show starts, and when it ends, and in between well-chosen detailed pieces that represent Alison's childhood growing up in a museum-like restored old house, and a funeral home, are wheeled on and off stage (set design by Stella Vatnsdal). This is an intimate story that is better told on a small stage (see also Dear Evan Hansen), the better to see, feel, and experience the raw and intense emotions of the piece. I don't remember crying like this when I saw it on Broadway, certainly not in the too-large Orpheum Theatre on tour.

Director Peter Froehlingsdorf has assembled a fantastic cast of Duluthians and helped them bring out the truth in their characters and this story. The three Alisons are equally strong and similar enough that it's easy to believe they're the same person, and they all have gorgeous voices. Amelia Barr as the eldest Alison is our guide through this story, and we're in good hands. Despite being a recent college graduate, she brings a maturity and emotional depth to the role and is believable as the 33-year old (changed from 43 in the original) reassembling her life from pieces she's saved. As the college-aged Alison, soon-to-be college student Helena "Laney" Goei is all charming awkwardness as Alison navigates this new world of feeling and being. Completing the trio is 7th grader Reagan Kern, all wide-eyed innocence and curiosity. Along with Greyson Holste and Jacob Waechter as Alison's brothers, the three Bechdel siblings are adorable, especially in their commercial for the "Fun Home." As Alison's parents, Zachary Stofer and Christina Stroup-Manchester will both break your heart with their nuanced portrayals of this broken, conflicted man and his long-suffering wife. Rounding out the strong cast are Anna Matthes as Joan and Patrick Timmons in a number of roles. A nice feature of this piece is that each of the characters has a moment (or more) to shine and a big song to sing, and everyone in the cast rises to the occasion.

Renegade's too short three-week run of Fun Home closes tomorrow and is sold out, but follow their Facebook page for the announcement of their upcoming season. I know there will be at least one that will force me to make the drive to Duluth to see it - such a burden! There's some really great theater happening in Minnesota outside of the Twin Cities, which is truly a joy to experience and discover.


*A few other regional premieres you should know about:
Who says everything happens in Minneapolis and St. Paul?!

**Plot summary borrowed from what I wrote about the Broadway production.