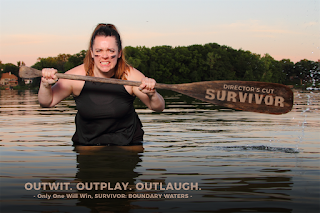 Summary: A partially scripted and partially improvised spoof of Survivor.

Highlights: This was my first time seeing a "Director's Cut" by Smartmouth Comedy, a female-driven comedy troupe. They do these shows throughout the year at the Phoenix, in which they act out a classic TV script, but with the director (Kelliann Kary) calling pause and asking for an improved scene. For Fringe, they wrote not one but five original scripts of Survivor: Boundary Waters, that began with eight contestants in the first show and ended with one winner in the last (which I attended). There are really two elements here - the Survivor spoof, which was great fun for fans of the show (as I am) - and the improvised scenes, well played by the cast (Jacob Fate as host Jeff with Adam Boutz, Bailey Murphy, Drue Knutson, Edd Jones, Kendra Yarke, Kerri O'Halloran, Mickaylee Shaughnessy, and Mitchell Tilges as the survivors). They have a lot of fun paying homage to and gently mocking a venerable TV franchise, which is fun for the audience too. I enjoyed the show so much I wish I could have seen the build-up over all five episodes, I mean performances. And I hope to catch a "Director's Cut" sometime (if they do any that aren't past my bedtime). Follow their Facebook page for info on future performances.