Minnesota Fringe Festival 2019: "Mad as Nell, or How to Lose a Bly in Ten Days" 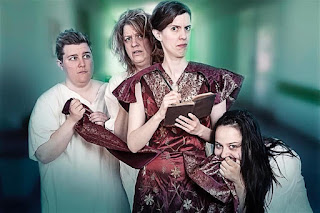 Title: Mad as Nell, or How to Lose a Bly in Ten Days

Highlights: Written by cast members Josh Carson, Shanan Custer, Allison Witham, and Kelsey Cramer as Nellie Bly, this show is the fun mash-up of history and pop culture that I've come to expect from this group (freshly minted as Rinky Dink Operations, with a quarterly variety show at BLB). They tell the loosely historical story of aspiring "lady reporter" Nellie Bly, who tries to impress editor Joseph Pulitzer by writing a series of articles exposing the horrible conditions at the mental hospital she gets herself committed to (possibly mashed up with the movie How to Lose a Guy in Ten Days, or maybe that's just for the clever title). The cast (also including Adelin Phelps, Aisha Ragheb, Tim Hellendrung, and equity members James Detmar and the deliciously evil Sue Scott!) is hilarious and playful, they sing a few fun original songs, there are just the right amount of 4th wall breaking moments, and the inspiring feminist story is succinctly, cleverly, charmingly, and irreverently told. Simply put, this is Fringe at its best.