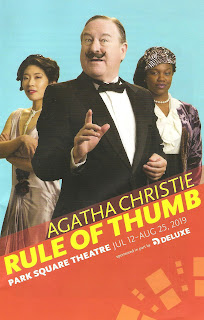 Park Square Theatre's final show of their 2018-2019 season opened during a busy July, followed by a busy Fringe Festival, so I'm finally seeing it now in the final two weeks of its run. As has become tradition at Park Square, they're presenting a fun summery mystery. Or in this case, three fun summer mysteries. Agatha Christie: Rule of Thumb is a triptych of short plays written by the famed mystery writer. They're performed by a talented and diverse nine-person company of actors, on the same set with some tweaks, all under the directorship of Austene Van who keeps the tone light, fun, elegant, and very dramatic. It's a delight to watch this team play together in this yummy summer mystery.

All three plays feature a murder that has happened, has almost happened, or is about to happen. In The Rats, a couple having an affair are set up to make it look like they committed murder, as we watch them slowly unravel the scheme. The Patient features a woman who suffered a fall and is unable to speak or move, but her doctor and the detective figure out a way to question her to try to determine if she fell or was pushed by one of a number of suspects, all gathered in the room. Finally, one of Christie's most famous characters Hercule Poirot (the utterly delightful Bob Davis) attempts to stop a murder before in happens in The Wasp's Nest.

Everyone in this cast (also including Audrey Park, H. Adam Harris, Jamie White Jachimiec, Neal Beckman, Peter Christian Hansen, Rajané Katurah, Sara Richardson, and scene stealer Ryan Colbert) has great fun with their roles (they all appear in two of the three plays, except Jamie, who sadly is only in one). As my friends at Minnesota Theater Love said, you're getting a lot of Acting for your money. Meaning it's all done in a highly stylized, exaggerated manner that is as fun to watch as it presumably is to do (I caught a few cast members trying not to crack up at each other). This style remains consistent even through the curtain call as each actor makes a dramatic entrance to receive their applause. This is definitely a mystery that is more silly and fun than dark and creepy.

We travel back in time through the three plays, all staged on the same versatile set which is changed a little between each play. The basic framework is clean and angular gray walls with white trim and a gray marble floor. The Rats is set in the late '50s/early '60s, with a set that looks like a sparse, mod, swanky pad. The quick scene transition is accomplished by the actors almost dancing the set pieces in and out, until we arrive in the late '30s/early '40s for The Patient. The same room now looks like a room in a hospital, complete with archaic medical equipment. The last transition happens during the one intermission, but I wish they would have done it like the first one and not had an intermission, just kept the momentum and storytelling going for 100 or so straight minutes. The Wasp's Nest takes place in a charming garden in the 1910s, with plants and flowers and benches. Similarly, the gorgeous costumes go from the full skirts and skinny ties of the '50s, to the longer tailored dresses of the '30s, to the more flouncy dresses of the early 20th Century. (Scenic design by Sarah Brander, costume design by Sonya Berlovitz.)

Agatha Christie: Rule of Thumb continues through August 25. Pro tip: try for the $20 rush tickets, and visit the new St. Paul location of The Loon Cafe before or after the show, in the space next door to the theater previously occupied by Great Waters Brewing.