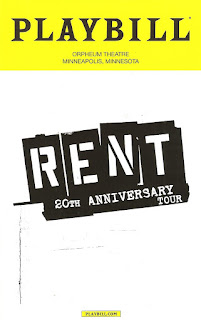 RENT gets me every time, even the 16th time. I first fell under the spell of Jonathan Larson's singular creation of hope, love, and community while watching the 1996 Tony Awards, which, five years before my first trip to NYC and in the very early days of the internet, was how a Midwestern girl like me learned about Broadway musicals. For those of you too young to remember 1996, RENT exploded on the pop culture landscape similar to how Hamilton did a few years ago. Not only did it win four Tony Awards and a posthumous Pulitzer Prize for Jonathan Larson, the original cast of unknowns (most of whom are still working today on Broadway and in TV and films) made the rounds of all of the TV talk shows. At the time I had just graduated from college and was living on my own for the first time, existing on a grad student budget without a car (literally riding my bike midday past the three-piece suits). I was the same age and in the same situation as the RENT characters (well, sort of, if getting a masters in statistics in St. Paul is like being an artist in the East Village). Perhaps this is why I fell so hard for RENT, in a way I haven't for any musical before or since. In short, RENT was my first musical love, and you never forget your first love, even if people tell you it's dated. Sure, maybe it's a period piece now with its quaint answering machine references. But here's where I remind you that there are currently over a million Americans living with living with living with HIV, with nearly 40,000 new cases every year. So until AIDS becomes the polio of the late 20th/early 21st Century, a disease of the past completely eradicated, RENT will never be dated. And even on that happy day, this story of young people struggling with disease, poverty, drug addiction, and loss, yet persevering through it and celebrating life and each other, will always be relatable. No day but today!

Further proof that this 23-year-old musical is not going out of fashion are the new generations of fans. As part of the original RENT generation, now well into our 40s, it's exciting to see the younger generations of fans. Including my all-time RENT companion, my 15-years-younger-than-me cousin who became a fan after watching the 2005 film (repeatedly). While as a movie musical it may not be the best, it's unique and wonderful in the fact that most of the original Broadway cast returned for the movie, nine years later, which is almost unheard of in film adaptations of stage musicals. But still, RENT is inherently a live stage experience, and on opening night of the 20th Anniversary Tour, back in Minneapolis for a second engagement, the live stage audience was decidedly younger than I usually see at the theater. More than that, this was an audience that already knew and loved RENT and was so here for it. They applauded in anticipation at Angel's and Maureen's entrances, hooted and hollered at all the right moments, and sniffled through the second act reprise of "I'll Cover You." RENT still has the power to move, inspire, engage, and delight fans new and old.

This is the same production that came to Minneapolis in 2017, billed as the "20th Anniversary Tour" (even though we're at 23 years and counting), which is basically the same production that ran on Broadway for 12 years and toured the country for nearly as many. Which is to say, the same familiar grungy downtown set (with scaffolding and folding tables and chairs), the same iconic, eclectic, and colorful costumes (Mark's scarf, Roger's pants, Mimi's spandex, all the winter coats), the same choreography (more interesting thoughtful movement than dancey-dancey), and the same beloved score played by an onstage five-piece rock band (here conducted by Mark Binns). It's comfortingly familiar to those of us who've seen it before and know every word before it's sung (RENT is a mostly sung-through musical), yet this fresh young cast makes it feel like the first time. Performing in RENT is a right of passage for young musical theater actors because it's been around for so long and requires actors in a certain age range. It feels like everyone has been in RENT, but yet they still continue to find more incredible performers to fill these roles and make them their own. In this tour, those performers are:

These eight leads plus the seven hard-working ensemble members, playing multiple roles, give their hearts and souls to the performance, and create an onstage family that I want to be a part of. Actually, I think this is why I love RENT so much; the depiction of this chosen family that loves and supports (and challenges) each other no matter what.

Jonathan Larson died the night before the Off-Broadway premiere of RENT. The show says "forget regret," but I regret all of the musicals he could have written that we'll never get to see. He changed musical theater, and reinvented the rock musical. What else might he have done?

RENT plays at the Orpheum Theatre on a torn-up but still navigable Hennepin Avenue in downtown Minneapolis through Sunday only. Click here for info and tickets, including details on the 23-year tradition of front-row rush tickets.

*Plot summary borrowed from what I've written about previous productions.