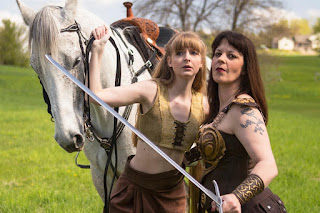 Summary: Xena and Gabrielle (from the '90s TV cult hit series) are transported from ancient Greece to a modern day comic con.

Highlights: Confession: I've never seen Xena: Warrior Princess and don't know anything about it, so I probably only caught about half of the references. (I am a nerd, but only about a few specific things, including theater). But while Xena fans might get more out of this show than I did (and the audience certainly seemed to), you don't have to be a fan to relate to and enjoy this fun, fierce, feminist show. At the comic con, Xena and Gabrielle encounter sexism from men, as well as women cutting each other down, an issue that real live comic cons face (I've also never been to a con). But with the help of a little magic and music, we all learn to be better. And the speculation about the two characters' relationship is finally, satisfactorily, resolved. Producer Ariel Leaf and playwright Nissa Nordland Morgan are perfectly cast as Xena and Gabrielle and surrounded by a strong supporting cast, including Elora Riley and Katie Starks as two very different comic con women, Matthew Kessen, Nicholas Nelson, and Richard "Doc" Woods in the thankless roles of the jerky men, and Heather Meyer in a hilarious turn as.... well, I won't spoil it here. A must-see for comic con goers and fans of Xena: Warrior Princess (my friends at Minnesota Theater Love, fans of the series, loved it), but you don't have to be either to enjoy the show.