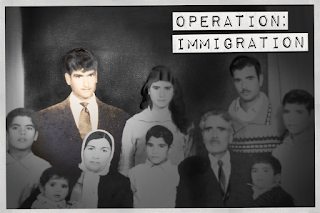 Summary: A solo show by #TCTheater artist Avi Aharoni about his father, a two-time immigrant.

Highlights: This lovely show was deservedly the highest selling show at Mixed Blood. Avi is so charming and disarming as he tells his father's story, and really his own story as the son of a Minnesota woman and a man who immigrated from Iran to Israel, and later to America. It's a scripted show, but he's very loose and playful with the audience, asking questions, and reacting to their reactions, which makes the show feel even more warm and personal. It's funny and poignant and relatable (because the more specific something is, the more universal it is), with great use of the space, well-chosen sound cues, and even a little rap. Director Robert Dorfman inserts himself into the action with comments, hilarious facial expressions, and the turning of the sign from one section to the next. This is a fascinating and inspiring immigrant story, about a man who sacrificed his whole life for his family's safety and security. But even more than that, it's a love letter from a son to a father, one that it was a privilege to witness, and a perfect ending to my 2019 Minnesota Fringe Festival experience.