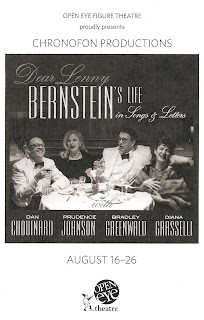 Leonard Bernstein. I know him mostly as the composer of one of my all-time favorite musical theater scores, West Side Story (now playing at the Guthrie for one more week), as well as other works ranging from classical to popular. But I never really knew much about the man behind the music or what his life was like. Thanks to Open Eye Figure Theatre and the team from Chronofon Productions (Bradley Greenwald, Dan Chouinard, Diana Grasselli, and Prudence Johnson), I now feel like I have an even greater appreciation for the music as well as the person who created it. Dear Lenny: Bernstein's Life in Songs and Letters is a well constructed and entertaining deep dive into the life and work of one of the best American composers of the 20th Century.

In 90 minutes, Dear Lenny sketches out the life of Leonard Bernstein narrated only by his own words in letters to others, or others' words in letters to him, along with some articles and other historical documents. We progress more or less chronologically through his life, from his arrival in NYC in the '40s to his death in 1990 at age 72. Quotes are read by the ensemble (compiled and edited by Bradley Greenwald, using several books as sources, including the recent compilation The Leonard Bernstein Letters), with the author and date displayed on a video screen above the stage. Interspersed with the quotes are well-chosen songs from Bernstein's vast repertoire, both sung by this incredibly talented cast and instrumentals (arrangements by Dan Chouinard for himself on piano, Greg Hippen on bass, and Bruce Thornton on clarinet and flute). Selections include the musicals On the Town, Wonderful Town, Candide,* and West Side Story, as well as classical works.

The letters touch on several aspects of Bernstein's life. He often felt torn between playing piano, composing, and conducting, and which should be the focus of his career (oh to have the burden of many talents!). He was gay but seemingly happily married to a woman (for a while anyway) with whom he had three children. He was an advocate for social justice and equality (e.g., the unusual for the time diversity of 1944 Broadway cast of On the Town, which included interracial couples holding hands and black and white sailors together at a time when our military was segregated by race). He was blacklisted during the McCarthy era, and although he was never called to testify, his passport renewal was denied. Some of his quotes read in the show, advocating liberalism and denouncing tyranny, are eerily relevant and could just as well have been written today.

This show is a delightful 90 minutes of music, history, and inspiration. The sparse arrangements of Bernstein's genius compositions, both familiar and new-to-me, are lovely, and beautifully performed by the ensemble. This is the fourth such musical historical revue from this group (the second I've seen), and they obviously have a huge following because the run is entirely sold out. Or it was, they've added an additional show, so get your tickets before they're gone! If you're a fan of American music/theater/orchestra/composer/conductor history, you don't want to miss Dear Lenny.


*You can see Bradley and others perform a "theatrical concert" of Candide next spring in a production by Theater Latte Da and VocalEssence at the Cowles Center.