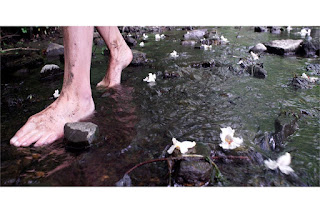 By: The BAND Group

Created by: The BAND Group

Highlights: Wow, and I thought Macbeth was a violent play. A quick perusal of the Wikipedia page (always recommended before a first experience with a Shakespeare play) was enough to turn my stomach, with its tale of rape, murder, dismemberment, and cannibalism (no wonder people fainted). I don't think I ever need to see a full production of this play, but The BAND Group's interpretation (directed and adapted by Adrian Lopez-Balbontin) is beautiful in its brutality and powerful in its message. Focusing on the violent rape and mutilation of Titus' daughter Lavinia (played by Jackie O'Neil, who also choreographed), this production returns some of her power as she dances with other survivors and gets revenge by killing her attackers, with the help of her mother Titus (an interesting and effective gender switch). In fact, The BAND Group is partnering with Cornerstone, an organization whose goal is "to reduce the prevalence of domestic violence, sexual violence, human trafficking, and general crime," all of which are on full display in this play. The talented and committed 18-person cast is comprised of actors, dancers, and musicians (clarinet, trumpet, guitar, percussion), and they create some beautiful (and at times disturbing) sounds and images. The most brutal scenes of violence are also beautiful and graceful in the choreography (which as an audience member makes it a little easier to take). A beautiful, powerful, original, relevant Shakespearean adaptation.