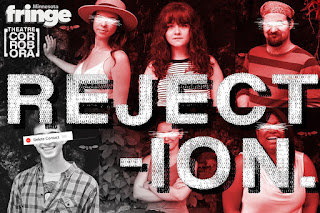 Highlights: Based on the title of the play you know someone's going to get rejected. But it's a story well told by the strong cast in this entertaining , if not particularly revelatory play. After discussing her relationship with the researcher, Sadie begins to doubt it, and confesses her fears to girlfriend Jade, who doesn't share her same fears. Their (seemingly) happily married friends Penny and Steven also talk to the researcher, revealing some cracks in their relationship as well. Single friend Margo is happy being solo (especially observing her friends' relationship troubles) but tries dating anyway. In the end everyone's life is changed by the study, which really just made clear the issues that were already festering (moral of the story: talk about your feelings). Perhaps a little predictable, but still enjoyable, and bonus points for the thoughtfully chosen instrumental soundtrack of love songs.