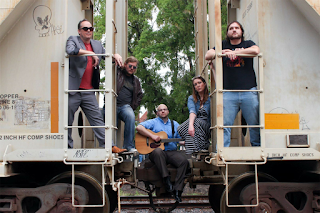 Summary: A band called The Cautious Opti-Mystics gathers in the studio to record their first album in just four days.

Highlights: I found this show to be really charming, with a simple premise that works well. We watch one hour of day two of their recording session, and in that time the band goes through a whole range of emotions and relationship changes. Lead vocalist Philip (Simondet) has a strict plan, and doesn't want to let his kickstarter supporters down. Producer T-Bone (Eric Heiberg) is enthusiastic if a bit clueless on how the tech works. Each band member gets their own song to tell us who they are, Philip's "One Man Band," drummer Alexis (Erin Kennedy) singing about the job of a drummer while accompanying herself on drums, guitarist John (Genz) lamenting being a third wheel in the band, and bassist Scooter (Will Roberts) shares what it's like to be taken for granted. We also get a duet (with plenty of not-so-subtle "do-it" euphemisms) from Alexis and John, who not only used to date but also played in a band together, which makes Philip jealous. But eventually they all make up and realize they're "Better Together." The show almost has a Flight of the Conchords vibe to it, with a band played by actual musicians with funny, clever songs that spoof the band. It's awkward and fun and silly and sweet, all in one.