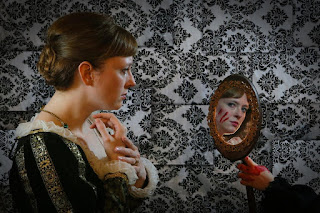 Written by: The Winding Sheet Outfit

Summary: A retelling of the history/legend of Erzsébet Báthory, a Hungarian countess accused of murdering dozens (or even hundreds) of young women and girls in the early 17th Century.

Highlights: I had never heard of Erzsébet, but a quick read of her Wikepedia page reveals a horrifying tale of torture, mutilation, and murder. The Winding Sheet Outfit tells us Erzsébet's story from her point of view, as a powerful woman manipulated and falsely accused, although perhaps not totally innocent. The ensemble tells the story in a non-linear fashion, with charming and creepy original music. They often break the fourth wall, calling each other by their actual name when someone goes too far or suggests something not in line with the story they're telling. This device puts the audience at ease and reminds us it's just one interpretation of a story that can never fully be known. But it's a story that has much to tell us about gender, power, justice, and violence. Emily Dussault gives a strong and empathetic performance as Erzsébet, while the rest of the talented ensemble (Amber Bjork, Boo Segersin, Derek Lee Miller, Joshua Swantz, and Kayla Dvorak) play her helpers, friends, enemies, and alleged victims. Dressed in period clothing and playing period instruments, they work well together as an ensemble, using movement, music, and physical theater to create the world of Erzsébet against the perfect background of the Southern Theater. After seeing the play I'm not sure what to think about Erzsébet, but I know the situation is a little more nuanced and complex than what history usually describes.