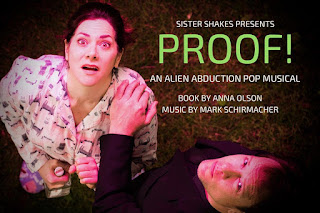 Summary: The title says it all: it's a musical about a woman abducted by aliens.

Highlights: This show has been selling out the small studio space, and it must be because it's fun and well-done. Admittedly the 10pm timeslot didn't allow me to be as engaged as I'd like to be (note to self: don't see 10pm shows), but what I managed to catch was quite enjoyable. A talented four-person cast (playwright Anna Olson, Bill Williamson, Don Maloney, and Tynelle Marschall), fun poppy songs (by Mark Schirmacher), and an amusing plot about an alien sent to harvest a human soul who falls in love with said soul, and then they end up saving the world (or something). Just one show left on the last day of the fest, so plan accordingly if you want to catch this funny, poppy, clever show (with aliens!)