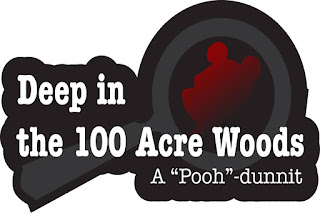 Summary: A noir murder mystery featuring the characters from Winnie the Pooh as people, and Pooh as the victim.

Highlights: In this version of the story, the silly old bear is a gangster, womanizer, and club owner who doesn't treat his employees very well (played by James Fairbairn). When he's found dead on the stairs of his club The Honey Pot, Detective Christopher Robin (Joseph Facente) comes in to interrogate all Pooh's employees and figure out Pooh-dunnit. It's a very clever promise and so fun to see these beloved characters as people, retaining their characteristics, and the cast does a great job of bringing out character specificities. We have club singer and Pooh's girlfriend Eeyore (Lana Rosario), her piano accompanist Owl (Ian Welch), Tigger (Mike Hanson) - the bounce-er, bartender Rabbit (Gregory Parks), nervous stuttering Piglet (Mickaylee Shaughnessy), and mama Kanga (Lauren Haven) and her young adult son Roo (Nathan Kelly) who wants to know who his father is. Det. Robin questions each one in turn, with flashback scenes filling in the story. It seems everyone had a reason to hate Pooh (hate Winnie the Pooh, can you imagine?!), so when we eventually find out the culprit it really doesn't matter. The fun comes in watching these familiar childhood characters juxtaposed against this familiar noir mystery storytelling style where they really don't belong. Very fringey indeed.