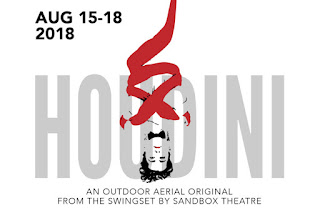 Sandbox Theatre is known for their ensemble-created original plays. Judging by their inaugural production, their new offshoot The Swingset does the same thing, only with aerial work. Like all of Sandbox's work, Houdini is a thoughtful and playful exploration of a subject (in this case the famed escape artist) that uses physical theater. But in this case the physical theater extends into the air on aerial silks hung from a contraption that does indeed look like a very large swingset. Performed outdoors in a couple of locations (I saw it at Pioneer Park in Roseville, where it continues tonight), it's a fun and magical experience.

I don't know about you, but I'm mesmerized by aerialists, as they wrap the silks around their limbs like they're playing full body cat's cradle, rising higher and higher in the air, striking beautiful and impossible poses, then dropping suddenly back to earth. It makes total sense to use this art form to tell Harry Houdini's story, whose popular tricks included escaping from a straight jacket while hanging upside down.

The 75-minute play is introduced by a charming Michelle de Joya, who at times narrates and at other times plays other characters, and musician Christopher Erickson on mandolin, adding a delightful soundtrack throughout the story. The two have a sort of clowning rapport, and Michelle takes to the silks as well. The main characters in the story are Houdini and his wife/performing partner Bess, played by Mark Benzel and Sarah Zuber, both of whom perform on the silks and the latter of whom sings a haunting song. Their story is mostly playful and adventurous, but also a little bit sad. Unable to have children, they write to each other with stories of their imagined child. And Harry seems to have an obsession with fame and performing ever more daring stunts, regardless of the affect on his family or health.

This quaint little backyard park in Roseville is the perfect setting for this original play created by the ensemble along with director Evelyn Digirolamo. It lends an air of of magic that couldn't be achieved indoors. The cast is dressed in playful yet functional costumes that hint at the turn-of-the-last-century time period (designed by Mandi Johnson).

If you're looking for something to do tonight but don't want to "waste" one of the last nights of summer indoors, go check out this charming and high-flying little show. Click here for details, all performances pay-what-you-will.