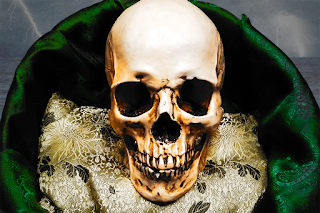 Summary: An adaptation of the 1908 short story "The Screaming Skull" by Francis Mario Crawford, in which a sailor is haunted by, well, a skull that screams.

Highlights: Directed and adapted by Tim Uren, Eric Webster plays the role of the sailor, having a conversation with a friend (whom we don't see). He begins by very calmly and matter of factly telling the story of the previous owners of the house where he now lives, a doctor and his wife, both now deceased. The doctor was found dead on the beach holding a skull, which the sailor suspects is the skull of his wife whom he possibly killed. The skull occasionally screams, as such things do, but the sailor seems to have it under control, no longer sleeping in the bedroom where the skull resides. But he becomes more and more unhinged as the night wears on and he continues to drink. This play is super creepy and will send chills down your spine, thanks to the most horrifying scream you've ever heard, provided by Katharine Glover, part of the live sound effects team including Tim Uren and Shanan Custer (filling in for Joshau English Scrimshaw) who also create other creepy sounds of an old house by the sea at night during a storm. Eric gives a very convincing and terrifying performance, which combined with the sound and lighting effects (see trigger warning below), create some deliciously spine-chilling storytelling.

Trigger warning: the flashing lights to simulate a fire are similar to strobe lights, especially when all other lights are turned out. I spent the last 20 minutes with my hands over my eyes peaking through my fingers. If you're a person prone to migraines or sensitive to flashing lights, you should think twice about seeing this play.