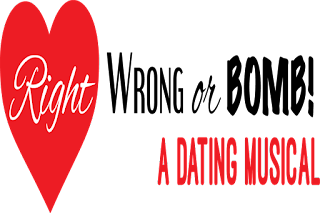 By: Backyard to Broadway Productions

Summary: An original musical about life and dating in the social media age.

Highlights: I saw this musical when it premiered a few years ago, and while I thought it had promise, I did have a few issues with it. The main character (Jill) seemed to be only focused on finding a man. But for whatever reason, I enjoyed it much more this time around. About the premiere I wrote: "It feels like a small-scale musical, in a good way, and with a little trimming would work great as a short and sweet 90-minute-no-intermission show." Creators Rosie Sauvageu Nestingen (music and lyrics) and Shannon McDonald and Brittany Shrimpton (book) have done just that, only 60 minutes. Maybe it was being forced to make cuts, or the fact that director of both versions Shanan Custer also co-wrote Not Fair, My Lady! which takes a very real look at women in musical theater, but this version feels more like a focus on Jill and all her relationships, including her female friends and her mother (who in this version is less of an unpleasant stereotype of a "cougar"), and a study of not just relationships but life in the social media age. The cast (Anna Larranaga, Delanie Wiedrich, Per Nestingen, Rachel Austin, Teri Parker Brown, and Thomas Matthes) is all new and all great, the songs are fun and clever, and there are a few cute winks at the audience. Sometimes less is more, and editing makes things better. This version of A Dating Musical seems fresh, tight, funny, relatable, and just right.