Minnesota Fringe Festival 2018: "Have You Seen This Girl?" 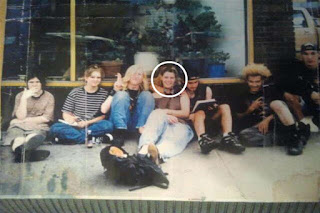 Title: Have You Seen This Girl?

Summary: Meeting behind the Hard Times Cafe, a group of about 20 walks through the West Bank neighborhood in search of a missing teenager.

Highlights: I love theater that gets the audience on their feet and outdoors (even if it is 90 degrees with 99% humidity), and this show does just that and makes you feel like you're on an adventure. Led by creator Ariel Leaf playing a character named Ariel Leaf, we walk through the West Bank area, University of Minnesota campus, and over to the river in search of Annie Parks. Ariel tells us that 16-year-old Annie has had a difficult life, including an abusive relationships, and ran away from home. Her parents didn't call the police, believing that she's in the West Bank neighborhood somewhere, and instead send this well-meaning group out to look for her so that they know she's safe. We stop and talk to people along the way, and at times I wasn't sure everyone was in on the act, that's how real it felt. As we walked along, Ariel also asked the audience about their experience in the neighborhood and if they've ever known anyone who left home, which brought up lots of interesting conversations. Because in addition to being a fun and novel way to tell a story, this play also deals with important and difficult issues about runaways, and whether sometimes it's better for them to be on the street if they have access to proper care, or whether being with their parents is always the best option. At the end of the play I had a thought that maybe "Ariel" (or Ariel) was Annie, and she was searching for her younger self, to tell her she's OK. This is a one-of-a-kind experience that often sells out because of the small group size, so plan ahead (and bring a cold drink).