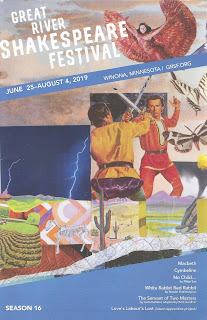 Last weekend I attended the Great River Shakespeare Festival in Winona for the second year in a row. I had such a great time with my fellow bloggers from Minnesota Theater Love and Twin Cities Stages last year that we decided to go again this year. If you're looking for a fun Minnesota theater vacation, GRSF is it. Winona is a charming river town that's just a two-hour drive from the Twin Cities, with lots of hotels, restaurants, shops, outdoor activities, and an impressive art museum. And for those of us who love theater, there's truly nothing better that getting away from daily obligations to immerse yourself in theater for a few days. Especially when the theater is so well done, so thoughtful, so inclusive, and so engaging, like it is at GRSF. I don't recall another theater experience where the Managing (Aaron Young) and Artistic (Doug Scholz-Carlson) Directors of the theater can be seen mingling with the audience before, during, and after every performance, and where there are so many opportunities to interact with the artists through various programs and events. It really feels like a fun, festive, community event celebrating theater (mostly but not exclusively written by the Bard). Ticket prices are quite reasonable, with four-show passes ranging from $85 to $140 ($21 to $35 per show). The festival runs through August 4, so you still have time to visit this year. See the GRSF website for all the details, and check out VisitWinona.com for all of the other activities available (if you can tear yourself away from the theater).

The trend I've noticed in the last two years is that GRSF does one big Shakespeare play with most of the 20+ person acting company included, two smaller plays (one Shakespeare and one Shakespeare-adjacent), each with about half of the company, and a modern very small cast play. At least, that's the way it's worked in the past two seasons. I love seeing shows in rep because when they're thoughtfully chosen (as GRSF does), the plays all speak to each other in obvious, or more typically not so obvious, ways. It's also great fun to see a company of actors performing vastly different work (e.g., Mrs. and Mr. Macbeth being silly in a comedy). The official theme according to the fabulous dramaturgical info they pass out before every show is "don't judge a book by its cover." We also noted themes of severed heads (Macbeth and Cymbeline) and actors presenting as players who then go into telling the story (No Child, Cymbeline, and Servant).

Here are a few brief words about the four shows I saw, in the order I saw them: 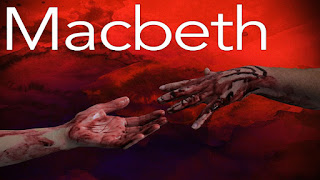 Macbeth by William Shakespeare, directed by Paul Mason Barnes
Everyone knows "the Scottish play," one of Shakespeare's most produced and most well known works. It's dark and dense and bloody as ambitious Macbeth and his even more ambitious wife plot a series of murders with the goal of him becoming King of Scotland. To their credit, they do feel badly about all of the murders, and both fall into deepening circles of madness. To be honest, this was my least favorite of the four plays I saw, which may have been due to the long runtime at the end of a long day and the dark, dense plot. But it's beautifully done, with a stately set (all mainstage sets designed by R. Eric Stone, more on that later) and impressive sound design (by Scott O'Brien) that sets a deliciously ominous tone and an increasing level of tension. Longtime company member Andrew Carlson and new company member Leah Gabriel (in her second year) make for a strong, sympathetic, and believable lead couple. In an interesting twist, the three witches (played by Victoria Nassif, Anique Clements, and Silas Sellnow) also play servants and other characters in the story, so that they're almost always onstage watching as their predictions unfold with increasing horror. The fight scenes (choreographed by Doug Scholz-Carlson) are truly terrifying, but also kind of fun to watch. 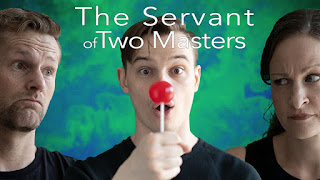 The Servant of Two Masters by Carlo Goldoni, adapted and directed by Beth Gardiner
This is the Shakespeare-adjacent play. Although it was written more than a hundred years after his death, it's in the style of commedia dell'arte which was popular in Shakespeare's time and likely influenced his writing. Director Beth Gardiner's new adaptation is exceptionally delightful. The talented seven-person cast (Gracie Belt, Daniel Stewart, Andrew Carlson, Leah Gabriel, Christopher Gerson, Victoria Nassif, and Silas Sellnow) starts the show sort of as themselves, as actors, discussing what show to do before launching into the story. It's very fun and playful, and somehow feels loose and almost improvised at times, while obviously being very intricately choreographed. Silas Sellnow plays the titular servant (who is always hungry and uses words about food as exclamations or curses) and also wrote the music, which is charming and clever and makes use of a myriad of noise-making gadgets. The play utilizes Shakespearean tropes like mistaken identities and a woman disguised as a man as it tells this silly and fun story. One audience volunteer gets to play a role in the play, but the entire audience is played to, especially those of us lucky enough to sit onstage, for an incredibly joyful experience. 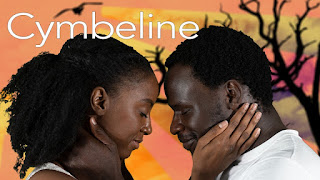 Cymbeline by William Shakespeare, directed by Doug Scholz-Carlson
From one of Shakespeare's most well-known and frequently produced plays, to one of his least. Not only had I never seen Cymbeline, but I'd never even heard of it before GRSF announced their season last year. It turns out it's one of the few Shakespeare plays that are neither a full out tragedy (everybody dies) or a full out comedy (everybody gets married); there are elements of both tragedy and comedy, kind of like life. I like those sorts of plays, and I really enjoyed this one. Thanks to the director, cast, and dramaturgical info it's very clear and easy to follow, and the heavy themes are balanced out by moments of lightness and humor. The story is inspired by the legend of Cymbeline, the King of Britain in 0 AD (Michael Fitzpatrick), his two long-lost sons (Blake Henri and William Sturdivant), his daughter (Anique Clements) with a husband her father does not approve of (Alex Givens), the King's new wife (Melissa Maxwell), and her son (also Alex Givens, in a totally opposite characterization) who she desires to marry to the princess. As one of my blogger friends said, the plot is almost like a "Shakespeare's greatest hits" playlist - star-crossed lovers, poison that just makes one look dead, long-lost family coming back from the dead, people in disguise, and royal succession. But it's put together in a satisfying way, including a most astounding appearance by the god Jupiter. 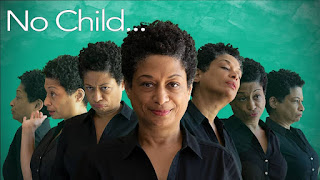 No Child... by Nilaja Sun, directed by Tarah Flanagan
This year's modern play was written by Nilaja Sun, whom I was fortunate enough to see at Pillsbury House Theatre two years ago performing her solo piece Pike St. No Child... is also a (seemingly) autobiographical play for one actor, the actor here being the incredibly competent Melissa Maxwell, who plays too many characters to count. The story begins with a longtime school janitor, introducing the story of Ms. Sun, a teaching artist with a six-week program to teach high school students acting and theater and have them perform a play. The students all have challenges and don't necessarily warm up to the idea very quickly, and Ms. Sun questions what she's even doing there, but in the end it's a life-changing experience for all. Melissa deftly transforms herself from the old janitor to the teaching artist to an inexperienced teacher to a half dozen very different teenagers. It's spell-binding to watch her tell this story and infuse each character with distinct life and personality. The play is fun, engaging, and poignant as it touches on issues like the role of theater, the troubles facing inner city kids, and how schools with too much security are really preparing students for prison, not college (see also Wyatt Cynac's Problem Areas).

The three mainstage shows share the same framework of a set (designed by R. Eric Stone); a balcony that runs across the stage, wooden platforms that can be moved around like tetris pieces, and a greenish stone floor. Macbeth adds accents of wood, Servant has colorful curtains, and Cymbeline features sliding aged green tile walls. It's pretty remarkable how one set is able to work for three very different stories, and you can even watch the transformation happen on Saturdays between matinee and evening shows. Another remarkable thing about all three mainstage shows is the fantastic sound design (Scott O'Brien for Macbeth, Katharine Horowitz for the other two). I'm not a person who usually notices sound, but I noticed it here. Not in a way that was distracting, but in a way that the sound truly supports the story and makes every emotional beat of the text and the performances more impactful.

In addition to these four main shows, GRSF is also presenting a handful of performances of the solo play White Rabbit Red Rabbit, performed by different company members, as well as a play by their theater apprentices and interns, Love's Labor's Lost. Besides the plays, there are tons of other events, most notably Saturday's "Front Porch" and Sunday's "Company Conversation" at a local coffee shop. Last year we learned about Intimacy Direction, which has really taken off in #TCTheater in the last year. This year we were treated to a discussion and demonstration by Feast of St. Crispian, a group out of the University of Wisconsin-Milwaukee that uses Shakespeare with veterans to help them work through post-traumatic stress and express emotions they might not otherwise be able to express. It was super fascinating as they discussed their method and the science behind it, as well as demo-ed it with a few volunteers. If you're interested, I encourage you to visit their website to find out more about this important work. The Sunday conversations allow the audience to discuss various topics with the artists in a more casual atmosphere.

Thanks to the Great River Shakespeare Festival for being such gracious and generous hosts to the Twin Cities Theater Bloggers, and for organizing a truly beautiful theater festival. I highly recommend that fans of #TCTheater venture out of town for a few days to experience this fun event, with faces familiar and new.