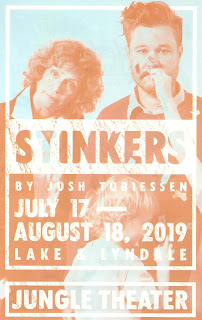 Friends, I had a little rough day yesterday. No specific reason for it, I was just feeling a little crabby. And then I had to drive to Uptown which makes me really crabby, and then I realized I forgot my wallet at home so I had to drive around and find street parking. But nothing turns around a "little rough day" faster than a show at the Jungle. Specifically a comedy at the Jungle. More specifically a world premiere new comedy at the Jungle, about a family of people having their own kind of little rough days. Whether the rough day is due to not getting the cookie they wanted, or trying to find a way to launder the money they embezzled, they get through it together. And live to face the next little rough day. Stinkers is a hilarious and heartfelt comedy about family, relationships, and a pickup with the hiccups.

Stinkers reunites married couple and parents playwright Josh Tobiessen and director Sarah Rasmussen (the Jungle's Artistic Director of the last few years), who last worked together at the Jungle on the "hilarious and heart-breaking" Lone Star Spirits two years ago. While Stinkers is perhaps a little lighter and less consequential than that play, which was one of my favorites of the year, it's no less fun, full of fully drawn characters, and relatable.

The action takes place in a Minnesota lake house (the one reference: Brainerd), rendered with much detail and realism by scenic designer Chelsea M. Warren. On the Jungle's tiny stage, it somehow looks roomy and airy, homey and familiar. Stay at home dad Brad is alone with his two children (approximate ages 2 and 3) for a week while his wife is out of town at a conference. In addition to naptime, snacks, and diapers, he has to deal with his unemployed friend Calvin always hanging around, and the sudden arrival of his mother Joyce, freshly released from a prison stint due to “taxes” (read: embezzlement). Joyce brings along her prison friend Lilith, and they settle in at the lake house (which used to belong to Joyce) for a few days. Brad has a (very) small business making wooden pickup trucks based on a story he made up about a pickup truck with the hiccups, and businesswoman -with-questionable-ethics Joyce finds a way to use it to her needs. Each character, even the kids (played by puppets manipulated by adult actors), has a specific journey in this story about the challenges and rewards of relationships in general, and the parent-child relationship in particular - whether the child is a toddler or an adult. But it's not in any way schmaltzy. On the contrary, it's quite sharp and funny, so that the tender moments (like when Brad tells the pickup story to his kids on the couch, or Joyce sings them the song she used to sing to Brad) catch you by surprise and are even more touching.

The playwright wrote this play with Sally Wingert in mind for the role of Joyce. If I were a playwright I'd want to write a play for Sally Wingert too, with her great comic timeline, expressive face, dedication to character creation, and ability to emotionally connect with the material and the audience, all of which she brings to this role. The rest of the cast are as perfect for their roles as Sally is for hers. John Catron and Nate Cheeseman were both in Lone Star Spirits, and play sort of variations on the same characters here - John as the harried but patient dad, with a strangely authentic relationship with his puppet children, Nate as the as the fast-talking slow-thinking friend with a vision board. George Keller says a lot with a little as Lilith, tough but with surprising depth. And then there are Megan M. Burns and Reed Sigmund, puppeteers and actors playing the children, with puppets made to look like them and dressed in similar clothes (costume design by Sarah Bahr, puppet design also by Chelsea M. Warren). It's an ingenious choice to have the children played by puppets, especially when manipulated by these two talents. Such fun to watch both of them, and their puppets, in a sort of double reality. Not only do they manipulate the puppet movements (invading the adults' personal space as kids do), but they also mimic the puppet's movements and emotions with their own bodies. So adorable, and somehow believable as real children. How else could you possible have a young child so accurately represented in a stage play?!

I'm not sure who the "stinkers" of the title are - the kids or the adults? It's hard to tell, both exhibit bad behavior, both learn a few things about life and relationships. Stinkers is another example of a sharp, well constructed, well executed, perfectly cast, delightfully entertaining play at the Jungle Theater. Little rough day forgotten. Which, by the way, is child Oscar's version of what his dad says to him when he's having a meltdown - "are you having a bit of a rough day?" That's OK, we all do, and thankfully we have theater like this to pick us up when we need it.

Go see Stinkers at the Jungle Theater in Uptown (usual warning to allow plenty of time to navigate construction, traffic, and parking) through August 18. Be sure to get your tickets soon before it sells out!