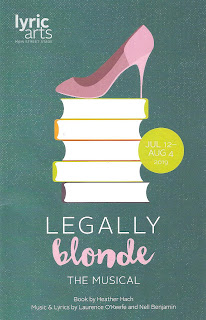 Oh my God! Oh my God, you guys*!! Lyric Arts' production of Legally Blonde is so much fun! I recently wrote that Jefferson Township Sparkling Junior Talent Pageant is the perfect fun summer musical (playing at Park Square Theatre through July 28), but now we have a second perfect fun summer musical. Unlike some other summer musicals, Legally Blonde is fresh, modern, fun, and feminist. I had never seen it before (or the movie from which it was adapted) because I'm a bit of a snob about movie-musical adaptations - I prefer original musicals. But I've been missing out! Elle Woods is a 21st Century heroine and role model who turns the stereotype of the dumb blonde on its head (see also Smart Blonde). Lyric Arts' production of Legally Blonde is sharp, funny, well-cast, and just an all around great time.

If you're one of the few people who, like me, who have not seen the movie or musical, the basic premise is that California sorority girl Elle is jilted by her boyfriend Warner just when she thinks he's going to propose. He has "plans," and needs a woman who is "serious" by his side. He tells Elle she's a Marilyn, and he needs a Jackie (the quintessential illustration of the duality of women we're all supposed to fit into). Warner is headed off to Harvard Law School, so Elle decides to follow him there and show him that she is serious, thereby winning him back so that they can get married and live happily ever after. You see, it turns out that this blonde is smart, and with a little extra studying she can even get into Harvard Law School, and excel. Through the people that she meets there and the legal work that she begins to do, she soon learns that there's more to life, there's more to her, than being Warner's wife. She becomes more, but not without losing herself. She can be smart and serious, but also blonde, perky, and pink.

Director Ben Thietje (Artistic Director of the fantastic DalekoArts in New Prague, making his Lyric Arts debut) has infused the show with such life and energy, hitting every possible note of humor. Even the scene transitions are accomplished quickly and efficiently. Choreographer Lauri Kraft has created some fun, athletic, and clever dances for the cast, including an Irish step dance routine, which I don't think I've ever seen before in a musical (a little odd, but it works beautifully and hilariously). The large and talented ensemble of 24 people (and two dogs, yes, real live dogs, both up for adoption) is so fun to watch, and they all bring such passion and delightfully specific character choices to their roles. The score is funny and clever, well executed by Music Director Anthony J. Sofie, the behind the scenes orchestra, and the cast.

As our heroine Elle Woods, Amanda Mai could not be more perfect (except for hair color). She's adorably perky and precious, but also steely strong as Elle finds her way, with a gorgeous voice. Maxell Emmett Ward continues to impress, here as the hilariously pompous jerk Warner. As good guy Emmett, a sort of mentor-turned-love-interest for Elle, Armando Harlow Ronconi is sweet and charming. Amanda White (also an Artistic Director of Daleko) is a hoot as Elle's beautician friend Paulette, and Bobby Gardner steals all the scenes in a number of roles, most notably as a shorts-wearing UPS delivery man. Also watch out for the powerhouse vocals of Natalie Dulka as Vivienne, Elle's romantic rival-turned-friend (I love that!), and the Greek chorus of eternally supportive sorority sisters (Jaclyn Juola, Abbi Fern, Alexhannah Joson, et al.); this is a show that's as much about female friendship as it is about romantic love.

The sleek and modern set allows for movement of people and set pieces as we move from school to the beauty shop to the courtroom, while a video screen above the set provides more ambience. The colorful modern costumes range from Elle's signature pink, to preppy school gear, to the Greek girls' chorus array of crisp white separates. (Scenic design by Chad Van Kekerix, costume design by Samantha Kuhn Staneart).

If you're looking for a fun and inspirational musical, fantastically performed, with a great message for all ages and gender identities, head on up to Anoka for the infectiously joyful and deceptively deep Legally Blonde (playing Thursdays through Sundays until August 4). 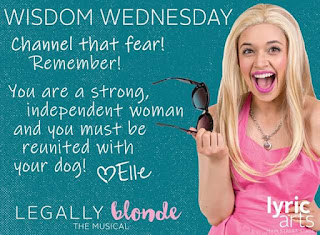 *This is a quote from one of the songs in the show. Otherwise I try not to use the phrase "you guys" because it's gender exclusive, contrary to popular belief.