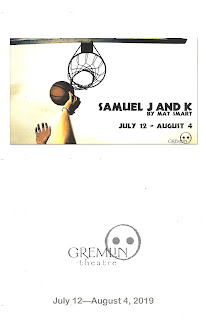 "A sports play written by Mat Smart? I'm in! (See also Tinker to Evers to Chance.)" I wrote this on Instagram last night, but as it turns out, Samuel J. and K. is not really a sports play. It's a play about brothers, family, betrayal, loss, and love. In the same way that Tinker to Evers to Chance (seen in a fantastic production at Artistry earlier this year) is not a sports play, but a play about family, grief, love, connection. There's something about sports that loosens people up and allows them to connect and talk about deeper things, and Playwrights' Center core writer Mat Smart uses that to great advantage in these plays. Here, two brothers (one adopted from Cameroon when he was three years old) bond over a game of basketball. Gremlin's production features two talented actors in their cozy intimate theater space, transformed into a basketball court and a hut in Cameroon by deceptively simple design.

The play unfolds in four scenes in just under two hours (with intermission). The first and last scene take place on a basketball court in the Chicago suburb of Naperville. Brothers Samuel J(ackson) Sanders, the elder, and Samuel K(ennedy) Sanders, the younger, are playing a game of (some sort of two-person basketball game that I don't understand) before K's college graduation. They have the same name because when their single mother (J's father abandoned them when he was four) adopted K at the age of three, he already had a name that was the same as her first son, and she didn't want to change it. J gives K a present for his graduation - a trip to Cameroon - which K never asked for or even wanted. But J talks him into it, over their mother's objection. They have a great time, until they don't. It turns out J is the one who's searching for something and feeling unsettled in his life, not K, who has no interest in looking for the biological parents who gave him up. From there, the dramatic events come a little too fast and frequently (a betrayal, a sudden illness), but it makes for some powerfully heightened relationship stuff.

Gremlin's Technical Director Carl Schoenborn has designed the set and lighting which, when combined with Jacob M. Davis' sound design, Sarah Bauer's prop design, and A. Emily Heaney's costume design, transports the audience fully to the various locations with just a few expertly chosen pieces. The sounds of the city contrast with the sounds of the remote African village; the darkness of the hut at night is haunting, with light softly illuminating the gauzy mosquito netting over the simple cot; and the brothers' clothing helps to differentiate their personalities. All of this happens on the backdrop of a basketball court, with the brothers actively playing, shooting, dribbling, passing, and all that basketball stuff. I momentarily regretted my decision to sit in the front row because I cannot catch a ball to save my life, but I needn't have feared, they had it (mostly) in control at all times.

As the brothers Samuel J. and K., Paul LaNave and Wariboko Gabriel Semenitari create a really believable bond. In the intimate space of Gremlin's thrust stage there is nowhere to hide, and both are so unaffected and true in their portrayals, you can feel the hurt and the love. Paul has been seen on #TCTheater stages for a number of years, but Wariboko just made his #TCTheater debut in Underdog's How It's Gon' Be a few months ago and is already building an impressive body of work. Under director Brian Balcom, the well-written play flows smoothly between the humor and the drama.

Although the play is set in Cameroon, it doesn't really delve into the issues of colonization and warfare, or international adoption, except that the boys' mother does not want them to go there. And I'm not sure what it says that it's a white man who feels at home in Africa. But it's something to think about, and the heart of the story really is the complicated relationships in families, regardless of their origin.

Samuel J. and K. continues at Gremlin Theatre in St. Paul through August 4. (Be sure to check out the food truck schedule at Lake Monster Brewing next door for pre- or post-show libations.)