"Blackbird" by Dark and Stormy Productions at Grain Belt Warehouse 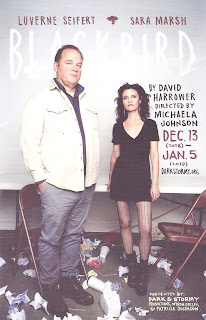 Don't let the Christmas lights strung across the ceiling fool you, Dark and Stormy's Blackbird is not a feel-good holiday play. Which is why it's a great choice for right now, if you need a break from the sugary sweet holiday fare (I myself have seen 11 holiday shows so far, with a few more on the schedule next week). Written in 2005, Blackbird is a brutal play about a woman confronting her abuser, 15 years after he raped and kidnapped her at the age of 12 (she may have gone willingly, but she was still a child). Yes, it's a difficult one to watch, but with painfully real performances by the two-person cast, in the intimate environment of Dark and Stormy's Northeast Minneapolis studio space, it's worth the effort.

Underneath the aforementioned Christmas lights, the performance space is littered with garbage. Food wrappers, paper bags, empty water bottles, pizza boxes, it's the messiest break room you've ever seen. In walk Una and Ray, or Peter as he's now known. Una has just shown up and surprised Ray after seeing his photo in a magazine at a doctor's office. She has a few things to say to him, and he's going to listen, whether he likes it or not (he doesn't). They haven't seen or talked to each other since that night 15 years ago when he took her to a hotel at an empty resort town, when she was 12 and he was 40. We find out that he spent a few years in jail, then was able to build a nice life for himself by changing his name and moving away. Una, the victim, was of course not so lucky. She was ostracized in the town she never left, had unhealthy relationships with men, and basically had her childhood stolen from her. She needs him to know that. Will Una finally be able to close the door on this traumatic childhood event and move forward into a happy life? That's hard to say, but it's something that needed to happen, and fascinating, perplexing, infuriating, saddening, and riveting to witness.

Dark and Stormy's Artistic Director Sara Marsh plays Una, with all the strength and vulnerability the character needs. Luverne Seifert, who I think of first as a hilarious comedic actor because of his work with Ten Thousand Things, and even his last appearance with D&S in the dark comedy The Norwegians, travels to the dark side here to great effect. Both actors are raw and present, nowhere to hide in the fully lit intimate space with the small audience just a few feet away from them. It's uncomfortable at times to watch them go to some dark places in this up-close-and-personal space, but being uncomfortable at the theater is good for us. It stretches our comfort zone and makes us think about things we otherwise wouldn't.

I'm looking forward to the day when we no longer have to tell stories of women being abused, because it no longer happens. But we're not there yet.