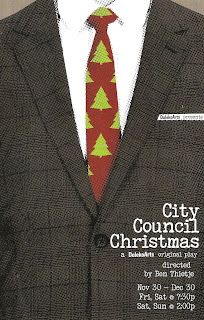 This was my fourth visit to the very southern-most #TCTheater, DalekoArts in New Prague (pronounced prayg not prahg, because this is Minnesota). I spent the first 15 years of my life in a rambler on a dead-end gravel road less than 20 miles from where Daleko is now, and my parents still live in Lakeville, so the drive to New Prague is filled with nostalgia for me. Daleko has built up a loyal audience over the last five and a half years, and it seems that their original holiday* comedies are just as popular as the ones at that other theater in the 'burbs on the opposite end of town. I'm not sure I would recommend spending two hours in the car to attend an 80-minute show (although I wouldn't dissuade you if you're so inclined), but if you find yourself in the southern metro, you should definitely check out what's happening at the Prague Theater in charming historic downtown New Prague. Which right now happens to be City Council Christmas, a hilariously quirky and fun comedy about a small town city council, which Daleko calls their "goofy, idiotic, fun, and totally ridiculous love letter to our audiences, and to the good people of New Prague and the surrounding area."

If you're a fan of Parks and Recreation, the fictional town of Dellview might remind you of Pawnee, with its earnest and/or disgruntled city employees. The play takes place at a city council meeting on December 20th, diving deep into the minutia of government that is important, but also kind of silly. Things like a growing raccoon population, or the controversy about changing the Christmas decorations from trees to wreaths. The mayor and four council members work through a few agenda items, observed by a couple of St. Olaf a capella singers who occasionally burst out into song, when the intern who doesn't know how to make coffee (an intern's number one job) shows them a letter she found in the crumbling brick walls of the building. The letter was written in 1868 by the town founder (Mr. Dell, natch), and lays out a few holiday tasks that must be completed to show that Dellview is in the holiday spirit, or the city will be dissolved. Ridiculous plot point? Yes, but it allows for a lot of ridiculous fun as the team puts on a nativity pageant using found costumes, turns the city council room into Santa's workshop, and is forced to say nice things to each other.

Daleko co-founder Ben Thietje wrote the play, with help from the ensemble, and also directs and plays council member Ronald Huff. It feels very much like an ensemble comedy, with everyone getting a moment or two at center stage, and also working well together as a group. Heather Meyer is the no-nonsense Mayor Linda Teeter (even the names are funny); Lizzie Gardner is council member Barb Rhodes, with big glasses, blue eye shadow, and a constantly exasperated expression on her face; Bobby Gardner is council member Ed Lewinsky, who may or may not be in a relationship with Barb; Phillip Hoelscher is council member Kevin Doofer, with the creepiest and weirdest Santa I've ever seen; and Sulia Altenberg is well meaning intern Ashley. Adding some musical fun are Maxwell Emmett Ward and Armando Ronconi as Justyn-with-a-Y and Jakob-with-a-K, who randomly spout a line or two of a song in the most delightful way. They also perform a ukulele and tap duet Christmas montage that doesn't make much sense plot-wise but is a highlight of the show. I seriously could watch 80 minutes of just Justyn and Jakob.

The tiny stage at Daleko has been converted to a sparsely decorated room in a non-descript government building, with the council members' imposing desk, a few chairs, and a podium as the only set pieces. It's fun to observe the council members' very different clothing, from conservative suits to Star Wars Christmas sweaters, which helps tell us who these people are at a glance. Some wacky Christmas decorations are brought out during the founder's holiday challenge, which get spread around and destroyed as the proceedings descend quickly into chaos. (Scenic design by Sydney Achler, costume design by Amanda White, props design by Ben Theitje.)

City Council Christmas is a fun, good-hearted, silly comedy, well-imagined and well-realized by the cast and creative team. It doesn't get much more charming than seeing a small-town Minnesota comedy in a small town in Minnesota, all decked out for the season in snow and lights. The council will be in session through the end of December, with some shows in the intimate theater already sold out, so make your plans soon if you'd like to venture south. And mark your calendars for two great plays in 2019 - the two-person trippy romance Constellations, and the Peter Pan origin story Peter and the Starcatcher.