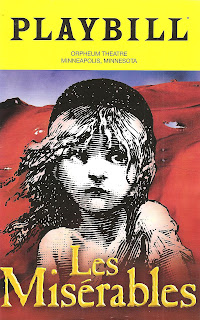 Fresh off of a successful Broadway revival, the music-theater phenomenon known as Les Miserables is on tour, stopping at Minneapolis' Orpheum Theatre for the final two weeks of the year. I'm not one of those Les Miz fanatics (like my friend Laura at Twin Cities Stages), I save the fanaticism for RENT. I saw the tour 18 years ago, but it was the #TCTheater production at Artistry (formerly known as Bloomington Civic Theatre) five years ago that production that really won me over to the beauty of the story, writing, "Les Miserables is such an inspiring story. Through a moment of kindness, a man's life is changed and he goes on to affect others' lives by passing on that kindness. But through it all he's still just a man, with doubts and regrets and struggles. In short, it's the human experience." So I was ready for this large-scale Broadway production, re-invented from the original. And I loved every minute of it (approximately 180 of them).

In case you're unfamiliar with the theater juggernaut that is Les Miserables, here's a quick primer. The musical premiered in London in 1985 and arrived on Broadway in 1987, and became one of the longest running musicals in both locations. Based on the 19th century novel of the same name by Victor Hugo, it follows the life of Jean Valjean from the release from his 20-year imprisonment for stealing food, to his involvement in the French Revolution, and many points and characters in between. Always on the run from Inspector Javert, Valjean tries to make a good life for his adopted daughter Cosette while struggling with his past.* Its themes are surprisingly relevant today - poverty, unfair imprisonment, the difficulties of re-adjusting to life after imprisonment, on the job harassment of women, the unfairness of prostitution laws that lock up the prostitutes but let the johns go free, and taking to the streets to stand up against the unfairness of the government. That's a lot to pack into three hours, but it makes the time fairly fly by (although there are a few too many long endings), as we barrel through a couple decades of French history, and the life of this one ordinary extraordinary man.

Les Miserables is entirely sung through, giving it that feel of constantly heightened emotions. The characters go from the highest highs to the lowest lows in a matter of minutes. It's all very melodramatic, and very sincere. There's no place for cynicism in Les Miz, you just have to give in to it and let yourself be swept away by the emotions. And if you do, it's a thrilling, chills-inducing, tears-producing ride.

This touring cast is consistently great. The piece really hinges on Valjean and Javert as the two constant thread throughout the epic story. And they've chosen well here. Nick Cartell makes me believe Valjean is the best man that ever lived, so humble and strong and kind, but with very human doubts. And he has amazing control over his vocal instrument, going from a soft and gentle falsetto to an all out belt, giving every note so much emotion. So much emotion! As Javert, Josh Davis is as dark and sinister a villain as you could want, but not without engendering at least a little sympathy. Watching these two dance around each other is the strong core of the piece.

The ensemble is chock full of talent (with some welcome diversity), beginning with the smallest cast members - little scene stealers Cosette and Gavroche (alternately played by Madeleine Guilbot and Vivi Howard, and the Parkers Dzuba and Weathersbee). Mary Kate Moore is heart-breakingly good as Fantine, the single mother forced into prostitution, with a haunting performance of "I Dreamed a Dream." Jillian Butler is lovely as her grown daughter Cosette and Joshua Grosso is a charming Marius; their meet-cute scene is very cute. Paige Smallwood is a tough yet vulnerable Eponine (beautifully singing the best unrequited love song ever, "On My Own"), while Allison Guinn and J. Anthony Crane provide ample comic relief as the innkeepers (although to be honest I could do without their wedding reprise, one of those too many endings I mentioned). Lastly, I love a good piece of hair-acting, and Matt Shingledecker (whom I saw play Roger in the 2011 Off-Broadway production of RENT) does it well with his glorious Fabio mane, adding to Enjolras' appeal as the leader of the revolution. With that hair, voice, and stage presence, who wouldn't follow him?!

I don't really remember much of the original Broadway production/tour, but from what I understand there was a turntable involved. This production uses projections, but smartly and sparingly; it doesn't overdo it as can often happen. Most notably, the projections make you feel like you're wandering through the Paris underground as Valjean is dragging Marius to safety, and Javert's fall (spoiler alert) is truly spectacular. But don't worry, it's not all effects, there are still massive moving set pieces representing the town, inn, and of course the barricade (the playbill says: "set and image design by Matt Kinley inspired by the paintings of Victor Hugo"). The production is huge and everything is perfectly executed, the big busy scenes nicely balanced with quiet moments. Last but not least, this gorgeous and rousing score sounds beautiful thanks to the dozen+ piece orchestra under the direction of Brian Eads.

You can see this stunning Les Miz through December 30 at the Orpheum Theater. Info and tickets can be found here, including limited student/educator rush tickets. Thanks to this beautiful cast for spending their holidays here with us in Minnesota. You're welcome for the warm weather, and sorry for the lack of snow.


Do you hear the people sing?
Singing the songs of angry men?
It is the music of the people
Who will not be slaves again!
When the beating of your heart
Echoes the beating of the drums
There is a life about to start
When tomorrow comes!

*Plot summary borrowed from what I wrote about the 2013 production at Artistry.