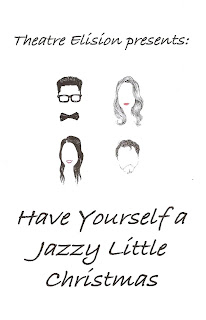 Theatre Elision brought back their holiday* concert Have Yourself a Jazzy Little Christmas, performing at various locations last weekend. I happened to catch it at the Lakeville Arts Center, which is in the church I attended as a child. When a new church was built, the city bought the building and turned it into a performing and visual arts center, which is a pretty fantastic example of recycling. It's a great space to watch a show or listen to music, and this one was a delight. Have Yourself a Jazzy Little Christmas is like putting on your favorite Christmas albums from the '40s and '50s and curling up under a blanket in front of the fire with a cup of hot cocoa. In other words, very comforting and nostalgic for those who grew up with these songs. The show is over for this year, but make a mental note about next year, and check out what else Elision has on the calendar for this season fulfilling their niche of small cast, original or rarely done musicals.

The quartet (comprised of Christine Wade, Krin McMillen, Phillip Armstrong, and Seth K. Hale) sang a dozen or so songs, accompanied by a jazzy four-piece band directed by Harrison Wade, who also created these marvelous and unique arrangements. There was not a single song I didn't know, which at a Christmas concert is kind of what you want. All of the standards you'd wish they'd sing, they sang. The quartet performed some solo numbers and some duets, but the highlights of the show were when they sang in gorgeous four-part harmony. Such a beautiful, jazzy, rich, classic sound.

Have Yourself a Jazzy Little Christmas feels like those old TV variety specials hosted by Andy Williams or Perry Como, complete with awkwardly charming scripted banter and performers in dressy evening wear. The "intermission" in this 90-minute show was actually not a break for the performers, as they joined the audience for a singalong of Christmas favorites. The whole show was warm and comforting, a lovely evening of traditional Christmas music.