"Animus" by E/D at the Southern Theater 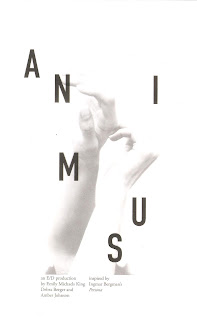 Animus is a theater piece that incorporates film (both pre-recorded as well as projected live) better than any I've seen before. In fact everything about the piece is thoughtfully created and exquisitely executed. Produced by a new company (called E/D), but not a new collaboration (Emily Michaels King and Debra Berger), it's inspired by the 1966 Ingmar Bergman film Persona and is in fact part of the Swedish filmmaker's jubilee celebration. I've not seen this film (or I think any of Bergman's work), but if it's as hauntingly beautiful and downright trippy as Animus, I now want to. Presented as part of last year's Twin Cities Horror Festival (as reported on by my friends at Minnesota Theater Love), it's been expanded to 90 fully engrossing minutes. Animus continues through December 22 only and should not be overlooked in this busy season both on and off stage.

In my blog posts, I typically write a short plot summary first, followed by details of the performance and design. For this piece, it's impossible to separate the two. In a fine example of content dictates form, the way this story is told is as fascinating, disturbing, and layered as the story itself. There are really three characters here: self-help guru and social media star Elizabeth (Emily Michaels King), nurse Alma (Debra Berger) who takes care of her after she suffers a mental breakdown of sorts, and a camera (operated by co-creator Amber Johnson of DangerVision Productions). The way that the camera follows them (with video projected live in black and white on a giant screen under the arch of the gorgeous Southern Theater) says as much about these two women as they do. It's quite beautiful to watch the live performances along with the close-up film shots at the same time, and the way they relate to each other.

Debra, Emily, and Amber created this piece together (you can buy t-shirts emblazoned with "woman artist" and "by women, for everyone" at the show), and each brings her unique talent to the mix, creating something truly unique. Emily is, among other things, a dancer, so her character expresses herself in movement and dance in a few scenes. Debra has a gorgeous voice, which we get to hear a few times (along with some awesome lip syncing). Amber has a film and video company, and she uses those skills to create some breathtaking images on-screen. This is truly a mixed media piece and tells the story in a way that enhances it and makes it more startling and thought-provoking. The dramatic lighting (designed by Joanna McLarnan), the at times amplified sound (designed by Jennilee Park), the black and white beachy costumes, even the program design with a sheer vellum overlay, all combine to create a consistent aesthetic.

The movie is from 1966, but this adaptation feels so 2018. Elizabeth paints this picture of herself on social media that is not who she is, until the mask cracks and she can no longer keep it up. Alma is a fan of Elizabeth, and can't believe she gets to work with this perfect woman she so admires. They become close as Alma cares for Elizabeth on a beach retreat, Elizabeth not speaking, Alma spilling all of her deepest thoughts. The line between the two blurs, and Alma is devastated when she thinks Elizabeth is using her.

Do yourself a favor and go see Animus at the Southern Theater. It's truly one of the most uniquely beautiful and chillingly disturbing pieces of art that I've seen. Six performances remain, tonight through Saturday. Tickets are just $24 or less, with two "pay what you can" nights. Click here for times and to purchase tickets.