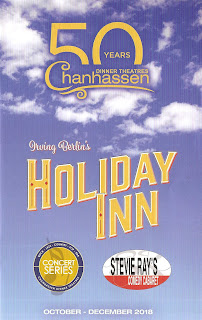 Christmas may be over for another year, but that doesn't mean we have to stop celebrating. After all, Christmas is only one of many holidays celebrated around the world, and only one of the seven holidays celebrated in Chanhassen Dinner Theatres' gorgeously fun production of the Broadway musical Holiday Inn. Based on the 1942 Bing Crosby/Fred Astaire movie of the same name, the musical debuted on Broadway in 2016, and is now receiving its Minnesota premiere. This is the kind of thing that Chanhassen does best - a big splashy musical with wonderful recognizable music and fantastic dance numbers. If you didn't see it this holiday season, don't worry, it's still playing through February 23, and there are still plenty of holidays to celebrate.

Ten reasons to see Holiday Inn even though Christmas is over: