"Much Ado About Nothing" at the Guthrie Theater 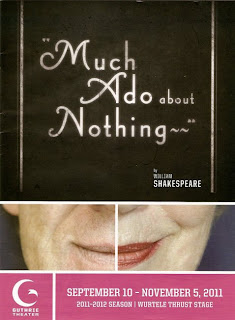 The Guthrie Theater's Much Ado About Nothing is another one of their big, beautiful productions of a Shakespeare play.  Like most Shakespeare plays I see, it took me a while to get into the story and figure out who was who in this big list of connected characters.  But once I did, it was quite enjoyable.  Judging from the costumes and props (a Victrola and streetlights), I'd say that the time period they're going for is about the turn of the century.  The cast is fabulous, full of many of my favorite actors.  And it's a credit to the depth of talent that the Guthrie pulls in that even the understudy list is populated with great actors!  I wish I could see the show again with the alternate cast.

For those of you unfamiliar with the plot (I had seen it about ten years ago, so I was mostly unfamiliar), Much Ado is a typical Shakespearean romantic comedy, full of misunderstandings that eventually lead to a happy ending.  The play contrasts the love stories of two couples: Hero and Claudio, simple young love, and Beatrice and Benedick, two smart and mature people who swear they'll never marry.  Much like the soap character who wishes someone dead, only to be suspected in their eventual murder, this much protesting against love ensures that they'll fall prey to Cupid's spell by the end of the story.  Beatrice and Benedick's friends conspire to get them together, telling one that the other is in love with them, causing each to see the other in a new light.

Highlights of the show include:
If you can only see one of the two shows playing on the Guthrie's main stages right now, I'd recommend The Burial at Thebes.  If only because it's something I've never seen before; the original music is amazing and really heightens the storytelling in the classic Greek tragedy of Oedipus' daughter Antigone.  But if you prefer something a little lighter, see Much Ado.  Both are entertaining in different ways.