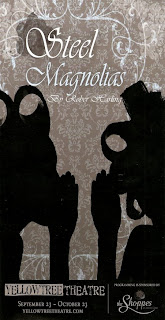 This is my second season attending theater at Yellow Tree Theatre in Osseo (it's their fourth season), and I have to say again how much I love the idea of great theater in a strip mall in the suburbs at an affordable price.  As a suburbanite, I sometimes grow weary of driving into the city and dealing with traffic and parking issues to see a show.  So it's refreshing to go to a nearby town to an unassuming strip mall and enter a warm inviting space "where good stories live."  I love Yellow Tree's mission - to bring theater into the community and make it a part of the community.  If you're on the North and/or West side of the cities, you should definitely check them out.  And when you go, don't go to a chain restaurant in Maple Grove.  Check out Nectar Wine Bar on the quaint main street of downtown Osseo, a town that looks like it could be anywhere in outstate Minnesota.  You don't have to go to the city to get great food, wine, and entertainment.

Most people have seen the 1989 move Steel Magnolias, but it began its life as a 1987 Off-Broadway play written by Robert Harling (starring recent Emmy winner Margo Martindale, and Rosemary Prinz who portrayed half of soap's first supercouple, As the World Turns' Penny and Jeff).  Unlike the movie, the play takes place solely in Truvy's beauty salon and the only characters seen are the six women - Truvy and her customers.  Everyone else in their lives (men, children, dogs) are talked about but never seen.  In fact there really isn't any action in the play; it's six women talking about their lives, which really puts the focus on the friendship between these women.  Through laughter and tears and insults, they're there to support each other through life.

The show takes place on four Saturday mornings over a couple of years, marked by events in young Shelby's life - the morning of her wedding; the following Christmas when she announces that she is pregnant, which poses a danger to her health; shortly before her mother donates a kidney to her; and (spoiler alert!) after her death.  Truvy (Jennifer Allton) presides over these events while washing and setting hair and doing nails.  Her new assistant Annelle (the appealing Amy Bouthilette) transforms from an insecure abandoned wife, to a party girl, to a born-again Christian, to a wife and mother.  Jennifer Kirkeby is the delightfully grumpy and matter-of-fact Ousier, and Mary Cutler is her adversary, the wealthy and recently widowed Clairee.  But the heart of the story is Shelby (Stephanie Cousins) and her mother M'Lynn (Doree Du Toit).  The two actors have a believably loving and antagonistic relationship as mother and daughter.  M'Lynn wants to protect her daughter from her own bad choices, and is frustrated that she can't.  The last scene is a killer as M'Lynn rails against the world for what happened to her daughter.  You might need tissues, but it won't last long.  As Truvy says, "laughter through tears is my favorite emotion."  Which is only one of many great quotes in this play.

Yellow Tree's small stage is transformed into a colorful, busy, and homey salon, chock full of beauty products and chotchkes.  The bad 80s fashions and hairdos complete the picture.  Southern accents are employed to varying degrees of success.  All in all, Steel Magnolias an entertaining evening of theater at the lovely Yellow Tree Theatre.  The rest of their season consists of a sequel to their wacky Christmas comedy, Miracle on Christmas Lake II, an "adventure fantasy drama" Still Life with Iris, and the classic Tennessee Williams play (and one of my favorites) The Glass Menagerie.  Another great season of theater in the 'burbs.