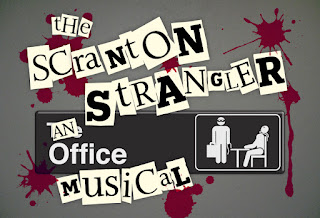 Summary: A recording of the 2019 Fringe hit musical about everyone's favorite office sitcom, focusing on the case of the notorious Scranton Strangler.

Highlights: The sound quality is not the best; this was likely filmed for archival purposes rather than for viewing. But it's great fun to revisit this one from the team that brought us Oregon Trail: A Musical, a Gilligan's Island/Hamilton mash-up, and more. Here's what I wrote after seeing the show in person last year:

From the bad photocopy of an office memo handed out as a program, to Dwight's signature mustard yellow short sleeved shirt, to Stanley's obsession with Pretzel Day, this musical is everything Office fans love. In fact, it seems to be drawing new audience members to the Fringe because of their love for The Office (including teenagers, amongst whom the show is popular even though they were barely born when it started). All of your favorite characters are represented, so many that several members of the 11-person cast do double duty. In this version of the story, Michael Scott is actually undercover FBI agent Michael Scarn investigating the serial killer known as the Scranton Strangler, who starts targeting Dunder-Mifflin employees. But the plot is basically an excuse to stuff in as many Office references and scene recreations as possible, which they do, sometimes in song form. And the cast does a great job of bringing our favorites to life. Written and directed by Travis Carpenter (who also plays Dwight, instantly recognizable as such) with original music and lyrics by Kyle DeGoey and accompanied by Lindsey Fallenstein on keyboard, this show is a gift to fans of The Office. Thank God for Netflix for carrying the series (which I just recently re-watched in its entirety), and for the reliable Fringe team at Literally Entertainment for applying their fun original Fringey musical form (which started with the surprise hit of the 2015 festival - Oregon Trail: A Musical) to The Office. What will they think of next?!