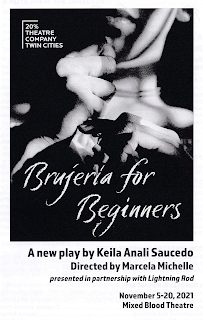 Amongst the theater companies recently lost to the pandemic (and other reasons) are Theatre Unbound (featuring female-identifying artists and stories), Uprising Theatre Company (transgender and gender nonconforming artists and stories), and now 20% Theatre Company (all of the above). The rest of #TCTheater really needs to step up to make sure that these stories continue to be told, and that women and members of the LGBTQ+ community are given a seat at the table. One new company that will be taking up the mantle is Lightning Rod, "a transgender-led, majority BIPOC organism, dedicated to legacy, development and opportunities for queer and trans artists," which is partnering with 20% Theatre's on their 50th and final show. Brujería for Beginners opened at Mixed Blood Theatre last night and it was a bittersweet event, full of celebration as well as sober finality. The family dramedy, with a magical twist, is a sweet and charming show, and the energy in the firehouse was palpable.
The hero of our story is Griselda (an appealing Johanna Keller Flores), a young woman who recently lost her mother and moved in with her aunt, cousin, and her cousin's grandmother. She begins practicing magic, or sorcery (brujería in Spanish), in an attempt to connect with her mother, and is a bit surprised when three spirits appear to her (portrayed with grace and charm by Javari Horne, Natalie Tran, and Gregory Parks). But after a few bumps along the way, the spirits help her on her journey of healing. Meanwhile, Griselda's cousin Lupita (Quinn Williams) is going on a journey of her own, discovering and coming to terms with her queerness, with help from new love Atlacamani (Deanalís Resto). Lupita's mother (Gael Palen) and Abuela (Lelis Brito) are dealing with the recent death of their husband/son, and figuring out the new family dynamic. The family struggles and argues, but in the end, they're a family of women who love and support each other through the hard times.
Like the title (translated as witchcraft for beginners), the play is performed mostly in English but with some Spanish sprinkled in, and not translated. Despite not knowing more than a few words of Spanish, I was still able to follow the gist of the story through the actors' emotions and expressions when they were speaking Spanish, as well as the audience reaction. The use of Spanish makes the story and the characters feel more authentic, which more than makes up for non-Spanish speakers in the audience not being able to get every word or joke. There were a good number of Spanish speakers in the audience on opening night, an audience that was much younger and more diverse than the typical aging white theater audiences seen at most theaters around town, which is not only exciting to see, but necessary for theater's continuing future. Listening to their reaction was delightful, and almost made me feel like I did understand the language.
Director Marcela Michelle brings out all of the humor and heart of Keila Anali Saucedo beautiful script, and the talented cast (most of whom are new to me) work and play well together, and feel like a real family. The spirits are dressed in gorgeously flowy and colorful costumes, while the mortals are in casual character-defining outfits. The set design is a bit fantastical as well, with a stage built on the stage, creating different performance areas, and paper flowers decorating the space. There's a nice use of music throughout the show, although at times the sound over the dialogue was a bit too loud (a technical issue I hear is being corrected). (Scenic and props design by Madeline Achen, costume design by Anna Brauch and Mari Navarro, sound design and original compositions by Queen Drea).
Brujería for Beginners is both grounded in the reality of the family, and fantastical in Griselda's foray into magic, exploring the ideas of faith, prayer, spirits, ancestors, grief, family, and connection. Continuing through Nov. 20, click here for info and tickets. 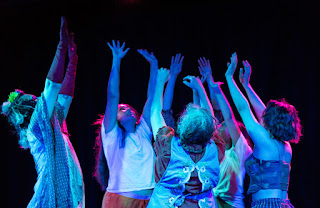