"The 4 Seasons" by the Moving Company at the Lab Theater 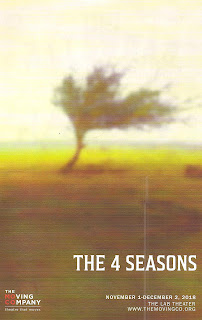 The Moving Company (which grew out of the ashes of the Tony-winning Theatre de la Jeune Lune) is back this fall with a very Moving Company kind of show. Which is to say original, profound, silly, thoughtful, delightful, sweet, surprising, and a little odd. Conceived by co-Artistic Directors Steven Epp, Nathan Keepers, and Dominique Serrand, The 4 Seasons was inspired by the idea of the four seasons, including Vivaldi's famous composition Four Seasons and Piazzolla's less famous composition Four Seasons. They also drew inspiration from Chekhov, and this quote from the Russian playwright about his work could also describe MoCo's work, and this piece in particular: "What happens onstage should be just as complicated and just as simple as things are in real life. People are sitting at a table having dinner, that's all, but at the same time their happiness is being created, or their lives are being torn apart."

The 4 Seasons takes place at a hotel, in another pun on the name. Three employees (the wonderful trio Heidi Bakke, Joy Dolo, and Steven Epp) go about their work, discussing things mundane and profound. Scenes of them chatting while absentmindedly performing their daily tasks are interspersed with short musical selections. There's much discussion of the weather, which we Minnesotans understand well, having the most extreme change of seasons. Beginning in spring, the story continues through all four seasons, ending in the bitter disappointment of winter. I've often found myself saying what the characters say in the middle of winter - "I don't remember what summer feels like," and vice versa.

There's also discussion of things as complicated as the gender power structure (in a particularly moving speech delivered by Joy), and why and how we choose to go on living even when we're beaten down by life. These people get up every day and go to work to clean up after other people, which has to be exhausting. But yet they still find joy, in the work, in each other, in the daily routine.

The set is a hotel room covered in sheets, with a carpet runner representing the hallway outside. Sheets are removed gracefully and we see the floor is green turf, one of the many whimsical touches. In one scene the character carry on a conversation while unclogging a sink (you don't want to know what clogged it!). A scene at the pool is particularly cleverly done. Characters are simply dressed in layers of black, white and gray. (Set design by Safa Sarvestanie and Dominique Serrand, costume design by Sonya Berlovitz).

If you've never seen The Moving Company's work, The 4 Seasons is a great introduction to the Chekhovian simple/profound stories they tell. And if you are already familiar with their work, this is another of their silly, moving, engaging creations. Continuing through December 2 at the Lab Theater in the Minneapolis' North Loop neighborhood.