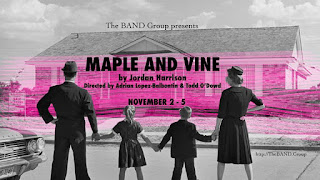 The 2011 play Maple and Vine explores what might happen if we really could return to the "good old days," the era that the Cleavers and Ozzie and Harriet make look so perfectly pleasant and innocent on TV. With all the recent talk of returning to a time when the world, and America, was supposedly greater than now, The BAND Group chose a great time to present this play. With minimal staging in an intimate space, the audience is almost uncomfortably close to this fake '50s world as its true ugliness is slowly revealed. As they always do, The BAND Group is partnering with community organizations, the Citizens League and the League of Women Voters, who both have materials and representatives at the show. Reminding us to use our voting power, as the play reminds us of the things at stake.

Maple and Vine tells the story of Katha and Ryu, a typical American couple, busy with their careers and hectic modern life. They've recently suffered a loss and are struggling with regaining their footing in their lives. When Katha meets a man in a sharp suit and hat who tells her about a place where life is simpler, she's intrigued. She convinces her reluctant husband to move to the Society of Dynamic Obsolescence (SDO), where he trades his job as a plastic surgeon for a position making boxes at a factory, and she trades her business suits for an apron. Katha, now called Kathy, seems to flourish in this environment as she revels in going to society meetings and making crab puffs. But Ryu, who is of Japanese heritage, struggles with the "period appropriate" racism and conflicting feelings about the "recent" internment of Japanese Americans, as well as his own conflicting feelings about his new role as "head of the household." As chief recruiters for the SDO, Dean and Ellen provide a perfect example of life in 1955, until secrets come to light that reveal they're not what they seem. Are Katha and Ryu ready to take over for them and make a life in this new old world, despite their reservations?*

In a small room in the Center for Performing Arts in South Minneapolis, the story plays out in a corridor stage area with audience seated in two rows on both sides of the action, with space well-used by co-directors Adrian Lopez-Balbontin and Todd O'Dowd. Sets and props are minimal, but a few period pieces and the '50s era costumes help us know where we are. Actors carry scripts due to a short rehearsal process to get the play in front of an audience. To be honest, this is a bit destracting at first, but you soon get used to it, and the actors are still very present and in character. As Katha and Ryu, Julia Amundson and Gregory Yang are appealing and empathetic. Levi Weinhagen and Jolie Meshbesher portray the perfect '50s couple, hiding something darker underneath. Rob Ward rounds out the cast in a couple of smaller but pivotal roles.

This feels very much like a low budget grass roots kind of production, but it works. Rather than sending tons of money on the production, they're getting this fascinating, disturbing, and through-provoking story in front of an audience at a time when we need to hear it. That's pretty exciting.

The moral of the story, of course, is that the "good old days" were only good for a certain segment of the population, and were not so good for many, particularly people of color and women. If the '50s society, or any past era, worked so well, we wouldn't have changed things. Yes the simpler pre-technology life can sound appealing, but this play shows us that the reality that goes along with that is not something we ever want to return to. Which brings me back to: VOTE!

Maple and Vine continues through Monday November 5 only.


*Plot summary borrowed from what I wrote about Frank Theatre's 2013 production.