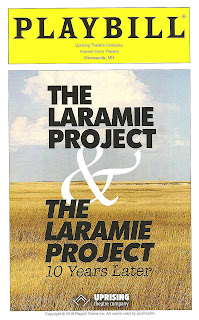 Twenty years ago last month in a small college town in Wyoming, a young gay man was brutally beaten and tied to a fence post, left to die. The name Matthew Shepard has become synonymous with gay rights and in particular with the national hate crime legislation that bears his name, passed into law 11 years after his murder. Unfortunately Matthew's story is not unique, but for some reason it capture the nation, and he became a symbol for a larger movement toward equality and justice. Much has changed for the better in the last 20 years, including the hate crime legislation and the repeal of "Don't Ask Don't Tell" and the Defense of Marriage Act. But hate crimes still happen, against members of the LGBTQ community, against Jews, against people of color, against immigrants. As demonstrated by this sad fact, along with the current White House resident's threat against the very existence of our transgender citizens, the good work being done in Matthew's name is far from over. This Tuesday offers a great opportunity to continue that work by voting for equality, for compassion, for humanity, for the environment, for justice. Thanks to Uprising Theatre Company for sharing the spirit of Matthew Shepard by presenting The Laramie Cycle at this moment in time.

Shortly after Matthew's murder, a group of theater artists known as the Tectonic Theater Project visited Laramie to interview its citizens and create a play about Matt, his murder, and the community. Because that's what theater artists do when presented with a crisis or a tragedy - they tell the story. The Laramie Project and the follow-up Ten Years Later are compiled from interviews and artist journals, as well as court documents and newspaper articles. They allow the voices of the people of Laramie to be heard, rather than just reported on. The plays are about Matthew and what happened to him, but they're also about the community. How does a community "allow" such a thing to happen? What happens to a community in the wake of such a horrific event? How does national media attention change the community? And is this community any different than any other community in America?

I saw both plays on a Saturday in reverse order, but I've seen the first play a few times before so it worked. I definitely recommend seeing them both if you can - to get the complete picture, and because seeing plays in rep is super fun and fairly rare (tip: walk a few blocks south on Nicollet to find any number of restaurants and coffee shops to spend a few hours between shows). Both plays are performed by the same cast (Baku Campbell, Bruce Manning, Jessica Thompson Passaro, Juliette Aaslestad, Michael Novak, Seth Matz, and Tia Tanzer) playing many of the same characters, and all are wonderful at giving these varied people a voice (even the unpleasant ones). Thanks to their performances, the direction by Sarah Catcher and Ashley Hovell, and the addition of a few key accessories for certain characters, it's fairly easy to follow the flow of story and character.

Both plays are performed on the same simple set in the Howard Conn Fine Arts Center, with just a few chairs and risers. One of the plays I saw had video projections and one did not, which I suspect was due to technical difficulties. For what it's worth I did not miss the projections when they weren't there, because the text is so powerful, but they did add some visual impact when present.

In The Laramie Project, we hear about the brutal murder from everyone surrounding the case, except, of course, from Matthew. His parents, friends, teachers, doctors, police detectives, even one of the murderers in his interview with police. We also hear how it impacted the artists to meet these people and conduct these interviews. Traumatic to be so close to the events, but they also seemed to forge a connection with the people they interviewed, and promised to tell their story to the best of their abilities. They don't judge or add commentary, they just allow the people of Laramie to speak for themselves.

In Ten Years Later we see how much has changed in Laramie, and how much hasn't. A strange thing happened; people started believing that what happened to Matthew was not a hate crime, simply a robbery or drug deal gone wrong. This despite the evidence provided in the trials, and the perpetrators' own statements at the time. Partly this was fueled by a 20/20 episode in 2004 that posits this theory, and partly it was the people of Laramie's desire to distance themselves from the crime. They interviewed some of the same people, including Matthew's mother Judy who has and continues to work tirelessly in her son's memory. One thing they were able to do in 2008 that they couldn't do in 1998 was interview the perpetrators of the crime, and it's sobering to hear them speak.

As with all of their work, Uprising Theatre is partnering with a community organization that is working in the area of issues brought up in the play. For Laramie, their partners are Quatrefoil Library and the Gay/Straight Alliance at local schools. Materials and representatives are in the lobby of the theater before, during, and after the show. Uprising is also hosting post-show discussions after every performance. Both of these things are evidence of their commitment to not just make art, but to affect positive change through their art.

The two plays of The Laramie Cycle continue through November 17, with two-show days on Saturdays, and single plays on Mondays, Thursdays, and Fridays (all shows pay what you can - click here for details). Both are beautiful plays about the power of theater, the power of community, the power of speaking out against hate. And about one pretty typical young man who became a hero and the face of a movement through his courage simply to be himself.