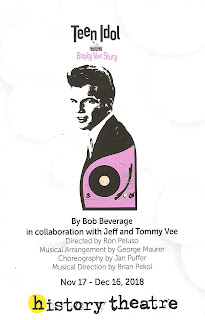 This winter, History Theatre is bringing back their original play with music based on the life of local rock and roll legend Bobby Vee. You would be forgiven for not recognizing the name (especially if you didn't live through the '60s), but you would surely recognize some of his hits (e.g., "Devil or Angel," "Take Good Care of My Baby," "The Night Has a Thousand Eyes"). And that's why we have the History Theatre, to bring us edutainment about parts of our local history that we maybe don't know as much about as we should. Teen Idol: The Bobby Vee Story premiered in 2016, and the creators collaborated with Bobby's sons Jeff and Tommy. Bobby Vee died from complications of Alzheimer's during that first run of the show, bringing an extra poignancy to it. On second viewing, Teen Idol really feels like a Jeff and Tommy's love letter to their parents - a clean-cut Midwestern boy who for a short time was one of the biggest music stars in the world, and the woman who loved him but didn't sacrifice herself for his career. The play has been tweaked a little, with three new songs added, and by my count about two-thirds of the 24-person cast are new to the show. But it's mostly the same as last time: a play that transcends the jukebox musical to tell the story of how one star survived his rise to and fall from fame with grace and dignity intact, thanks in part to his family.

Below is an excerpt from my 2016 post about the show, with a few updates.

The show begins on the day the music died. In the wake of the tragic plane crash that killed Buddy Holly, Ritchie Valens, and the Big Bopper on their way to play a gig in Moorhead MN, 15-year-old Bobby Velline makes his public debut singing in a band with his older brother and a few friends. They soon started playing gigs around the state, score a radio hit with their recording of Bobby's song "Suzie Baby," and the rest is rock and roll history. We watch Bobby's continually rising success, his marriage to local girl Karen, their move to LA, and his friendship with other musicians such as The Shirelles and Del Shannon. But then things take a turn when the early '60s gives way to the late '60s, music changes, the British invade, and the hits stop coming. Bobby and Karen decide to move home to Minnesota and live a quieter life away from the spotlight, raising their family, but still involved with music. Bobby Vee's stardom may have been a quick rise and fall within ten years, but a happy and successful life and family continued far beyond that. It's refreshing to see a rock and roll story that doesn't end in tragedy, especially when fame came at such a young age.

The play (written by Bob Beverage) does wonderful credit to Bobby Vee's life and family, but if I'm being nitpicky, there are a couple of threads left hanging. One scene shows the beautiful integration of black and white musicians on Dick Clark's Caravan of the Stars tour, and Bobby's shock at the racism they face in some of the small towns they visit, but the issue is never brought up again. We see Bobby's mother and brother suffering from depression, but their stories also are never really resolved. But those are minor issues in a play that tries to cover the totality of a life and family.

Tyler Michaels (one of the returning cast members) is the perfect person to embody Bobby's magnetic stage presence, winning smile, kindness, smooth crooning voice, and early '60s pompadour. He has the audience in the palm of his hand from the moment he takes to the mic to sing "Wake Up Little Suzie" on that fateful day. Tyler not only brings these classic songs (including "Devil or Angel," "Rubber Ball," and "The Night Has a Thousand Eyes") to life, but he also gives heart and soul to the character of Bobby. Near the end of the show he passes the reins to Bill McCallum (new to the show this year), who takes Bobby into his older years and diagnosis with Alzheimer's. The staging, costumes, and performances make it easy to believe the two are the same person.

A big draw of this show is the music, and it doesn't disappoint. But instead of forcing the songs into the characters' mouths to sing to each other as in a jukebox musical like Mamma Mia, Teen Idol is structured as a play with music, with most of the songs sung in context - a concert, rehearsal, studio, or music video (with a live camera projecting images on the back wall of the stage to super cool effect). A couple of exceptions are when Bobby sings "Run to Him" to his soon to be bride, and a sort of dream date sequence to "Come Back When You Grow Up," and both work well and are quite charming.

I knew more songs that I thought I would, because these hits are part of the fabric of our culture, whether we're aware of it or not. And this cast, several of whom also double as band members, really bring these songs to vibrant life under the music direction of Brian Pekol (taking over for original music director and arranger George Maurer). Choreographer Jan Puffer recreates the classic '60s dance moves in such a fun and fresh way it makes you want to get up out of your seat and do the twist! The music and dance highlight of the show is Dick Clark's Caravan of the Stars tour, in which Bobby and a dozen other musicians travel by bus. They all sing their own and each other's songs, like a precursor to Carpool Karaoke, and it's great fun. All of this happens on Rick Polenek's fun and versatile set, with a raised stage area and oversized records that function as tables and platforms for performances. Costume designer Kathy Kohl clads the characters in clean cut early '60s sweaters and skirts, transitionsing to the bell-bottoms of the late '60s and '70s. Last but not least and pulling it all together is director Ron Peluso, who keeps the show running smoothly, utilizing all parts of the stage and audience, with a nice balance between fun musical moments and poignant family drama.

2018 update:
Tyler Michaels may be the star of the show, but this truly is an ensemble piece, with most ensemble members playing multiple roles with many costume and wig changes. There's so much talent in this cast it's a shame we don't get more time with each of them (although the show is long enough at 2.5+ hours). There's Nicholas Freeman reprising his role as Buddy Holly to start the show (and going on to play multiple other roles), Adelin Phelps as Bobby's wife Karen, a role she passes off to Teri Parker-Brown who also plays (in her words) "all the old broads in the play," Joey Miller with the comic relief as Bobby's eccentric producer Snuff Garrett, Eric Morris as the tortured Del "Runaway" Shannon, John Jamison II in a too brief appearance as Little Anthony (et al), and on and on. The entire cast brings such joy and energy to the show that the audience can't help but have fun along with them.

The second incarnation of the infectious and satisfying Teen Idol: The Bobby Vee Story continues through December 16 at History Theatre in downtown St. Paul. Whether you lived through the '60s or not, it's rewarding to experience all those great old hits, and learn about the humble rock and roll star who lived right here among us.