"Words Do Move" by Sandbox Theatre at the Crane Theater 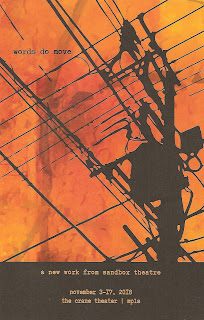 Words Do Move. Or in this case, words, music, movement, images, and the combination thereof move. Sandbox Theatre's latest ensemble-created work is a series of poems, stories, songs, and dances about relationships, identity, grief, joy, and life. It is, indeed, moving, as the five-person ensemble and one-person band share their stories and their souls with the audience. Words Do Move is unique and lovely and just over an hour long, all good things, and plays through November 17 at the Crane Theater in Northeast Minneapolis.

The words in the piece are lyrical and poetic, and the ensemble of five (which created the piece along with project lead Heather Stone* and director Matthew Glover) perform them individually, in small groups, or as a whole. They're accompanied by music designer Theo Langason on guitar, who provides a constant soundtrack to the stories, as well as performs songs with lyrics along with the cast.

Another important element of the storytelling is movement. Not "dance" so much as a fluid movement of bodies that further expresses the emotions of the piece. Video projections** of images or scenes play out on the screen behind the cast, adding a beautiful visual element (designed by Tamara Ober). The cast is dressed in whimsical, flowing, colorful garments with words written on them (designed by Kathy Kohl). All of the elements work together to convey the emotions of the piece. It's short but thoughtful and impactful.

This feels like a piece that would be entirely different if it were created by a different cast. In other words, these stories feel personal to this wonderful open-hearted ensemble (Atim Opoka, Delta Rae Giordano, Hector Chavarria, Henry Ellen Sansone, and Peter Heeringa). Stories of not liking one's skin, or being a "gender outlaw," with the cast showing great strength and vulnerability in sharing themselves with the audience.

I'll leave you with a note from the creators:


Words Do Move is a reaction - to regression, to polarization, to the enabling and championing of sexism, racism, and bigotry. It's a call to find connection when all of our bridges are burned to the ground. It's our joyful, defiant acknowledgement that we are still here. Tonight, we will use our words, our songs, and our bodies to rebuild those bridges. We'll try to, anyway. What else is there but to keep going, and to love one another along the way.

*For more on Sandbox's process of creating work, listen to the episode of the podcast The Bazzness that features an interview with Heather Stone.
**For those with motion sickness sensitivities, you might want to wait out in the lobby until the show begins, like I did, because the pre-show video, while beautiful, is like sitting in the back seat of a car looking out the window (i.e., not good). Fortunately there isn't much of this motion sickness-inducing video in the show itself, although I did have to close my eyes a few times.