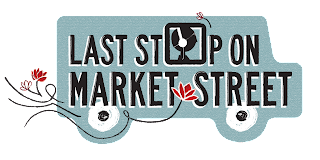 Based on a book by Matt de la Peña and adapted for the stage by Cheryl L. West (with music and lyrics by Lamont Dozier and Paris Ray Dozier), Last Stop on Market Street tells the story of a boy named CJ. He lives a sheltered life with his parents in a house behind a gate, and doesn't have a lot of friends, other than animals. When his parents go on a business trip, they leave CJ with his Nana, who lives in the loud and busy city. CJ is counting down the hours until he can return home, and would like to just sit in his room with his devices until then. But Nana won't have that, and brings him along with her out into her colorful world. They take the bus to, yes, the last stop on Market Street. Nana tells CJ it's a surprise, and it sure is when they arrive at a soup kitchen in a poor neighborhood. CJ learns about generosity, and empathy, and friendship.It's not an unexpected ending, but it's sweetly told, with fun music that includes rap, something you don't often hear coming from a theater stage. The fantastic cast is made up of CTC favorites, including the endearing Alejandro Vega as CJ, the great Greta Oglesby as Nana, and an ensemble cast that features the considerable talents of Ansa Akyea, Dwight Leslie, and Autumn Ness. The recording is clear and easy to see/hear, although I wish the camera had pulled back at times to show the full stage. But these recordings were likely never meant to be viewed in this way, and I'm just grateful they exist and theaters are giving audiences access to them.
Click here for more info on Last Stop on Market Street.