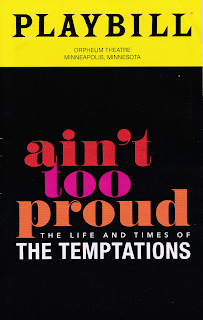 The trend of biomusicals about musicians and their lives and careers has reached The Temptations, one of the most successful groups to come out of Motown. Ain't Too Proud is based on a book written by Otis Williams, one of the founding members, and the musical's book was written by acclaimed playwright Dominique Morisseau, whose plays have been produced by Penumbra Theatre and Yellow Tree Theatre (the latter did Skeleton Crew two years before its recent Broadway premiere). The musical is similar in structure to Jersey Boys, one of the first (and in my opinion best) biomusicals, which follows the life of Frankie Valli and The Four Seasons. In both musicals the story of the group is narrated by its members, but there's just one narrator here - Otis Williams. He tells the story of The Temptations directly to the audience, from their formation, to their early hits, to the rotating door of members. And it's chock full of great Motown hits of the '60s and '70s, by other artists as well as The Temptations. This traveling cast is truly phenomenal and brings great energy to the show, and a good time was had by all. Join the celebration on Hennepin Avenue through July 10.
Read more » 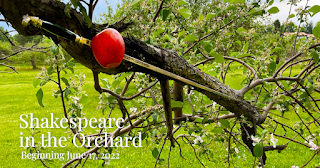 Zephyr Theatre's summer outdoor Shakespeare tradition continues with the rom-com-turned-tragedy Romeo and Juliet at an idyllic spot on Aamodt's Apple Farm. It always feels like Shakespeare was meant to be experienced in the great outdoors, in a more intimate and relaxed setting like this. Despite the tragic outcome of the play (I always hope that somehow the friar's message will get through to Romeo and those two crazy kids get to run away together as they planned, but nope), it's a lovely evening in a perfectly gorgeous setting. So check the weather, dress and hydrate appropriately, and go see some Shakespeare in Stillwater this weekend!
Read more » 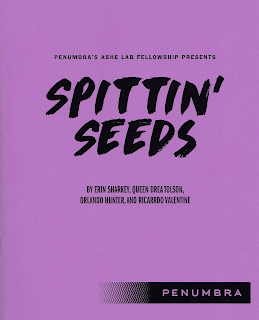 For two years, the artists in Penumbra Theatre's Ashe Lab Residency program have been working together to create a new work of theater/music/dance/poetry. The result is Spittin' Seeds, a 75-minute celebration of Black joy, community, culture, and resiliency. It touches on tragedy as well, but for the most part it's a magical, mystical, beautiful tapestry of song, dance, scenes, and visual delights. Including the talented cast comprised of #TCTheater veterans and young actors, it's a really lovely collaboration by all of the artists involved. See it at Penumbra through June 26 only.
Read more » 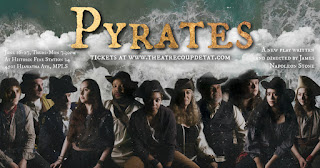 Ten years ago, I saw the first part (Millennium Approaches) of Tony Kushner's epic two-part masterpiece Angels in America on stage for the first time, by a new-to-me theater company Theatre Coup d'Etat. I was so impressed with how this small company handled this big play, and "found myself wondering when Theatre Coup d'Etat will present the second part." The bad news is they never did, and now they're leaving town. The good news is I've been fortunate to witness ten years of their work, which is always interesting, thoughtful, and unexpected, most often produced in an intimate non-traditional space; and that they have one more show before they leave #TCTheater. Pyrates, an original play by Artistic Director and frequent actor/director with the company, James Napoleon Stone, follows in this tradition. It's a rousing pirate story about loyalty, legacy, and camaraderie, featuring a talented and diverse cast and live music in an up-close-and-personal in-the-round space. Your final chance to see Theatre Coup d'Etat perform in #TCTheater ends on June 27 (click here for info and tickets).
Read more » 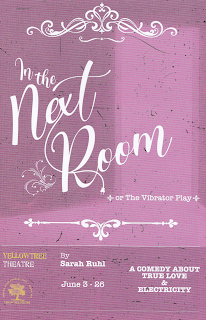 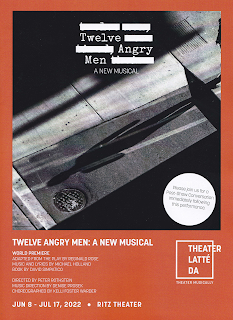 I know what you're thinking: the classic American film and play Twelve Angry Men... as a musical?! It sounded pretty odd to me too when I first heard about it a few years ago, but after seeing Theater Latte Da's world premiere musical adaption (on stage at the Ritz through July 17), I'm sold! It just goes to show that literally any subject can be made into a musical, if done well and thoughtfully by talented artists. Check, check, check. Telling this story that was originally a TV show in 1954 through a modern and musical lens heightens the themes of justice and productive communication. It's still the 1950s on stage, but the cast and creators are aware that it's 2022 in the audience, and this story needs to speak to now, which it pretty geniusly does. Combined with a really interesting jazz score that's seamlessly woven into the dialogue, a simple and classic design, and a diverse cast of 12 talented men, and it feels like this story was crying out to be a musical all along.
Read more » 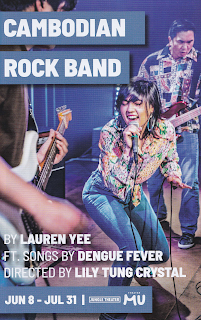 Originally planned for summer 2020, the Theater Mu / Jungle Theater co-production of Lauren Yee's play with music Cambodian Rock Band finally hits the stage at the Jungle, and to say it's worth the wait is an understatement. Part rock concert, part history lesson, part family dramedy, Cambodian Rock Band explores the complicated and tragic history of Cambodia in the latter half of the 20th Century through the lens of music, art, and one specific family. It's both an epic and an intimate story, and features fabulously unique music by the Cambodian indie rock band Dengue Fever, with fantastic performances by the mostly local and all Asian American cast. It's playing through the end of July, so you have plenty of time and no excuse not to see this ingenious new, innovative, and important work of music-theater.
Read more » 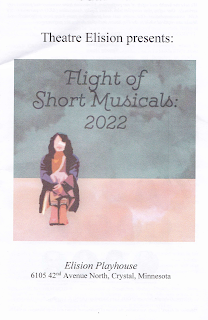 About a year ago, I returned to the theater after 508 days without it to see Theatre Elision's truly lovely production of Islander at Elision Playhouse, continuing in their tradition of new or rarely done one-act musicals with mostly female cast and/or creative team. Now in just their second post-covid-intermission production, they're bringing us another edition of Flight of Short Musicals, which they first did in January 2020 (sadly no flight of drinks this time, because covid). Elision has a knack for finding hidden gems, and for this program they found six of them: short musicals, or excerpts from musicals, that are perfect and complete in just 15 minutes or less. If you're interested in the future of music-theater that's more than just the big splashy musical, you don't want to miss this. Just two performances remain - click here for details.
Read more » 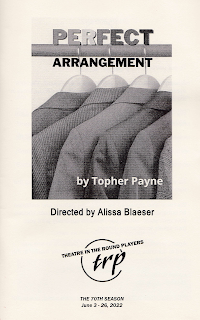 Just in time for Pride Month, Theatre in the Round is bringing us the story of two gay couples in the '50s, and what they have to do be with the person they love and still have a career and acceptable public persona. What starts out as a comedy turns tragic as this Perfect Arrangement falls apart. As a time when LGBTQ+ rights are threatened, it's good to look back at history and the people who worked so heard to achieve those rights, to remember how much things have changed, and how much they haven't. But this is no dry history lesson, it's an entertaining comedy with an emotional pull that makes you feel for each of the characters as they navigate this sticky situation. A strong cast and spot-on design make this play a Perfect Arrangement indeed (playing weekends throughout June).
Read more » 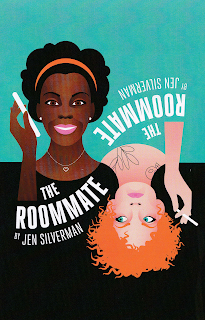 "PRIME Productions seeks to explore, illuminate and support women over fifty and their stories through the creative voice of performance." I say huzzah to that! And to the return of PRIME and their celebration of women in their prime, who are often overlooked in entertainment and in life. Their first post-pandemic-intermission production is the two-hander The Roommate written by Playwrights' Center affiliated writer Jen Silverman, and it's a gem. In this dark comedy that the website describes as "Breaking Bad meets Grace and Frankie," to which I would add a little bit of Good Girls, two very different women find themselves living together, and learn things from each other, whether it's how to commit crimes or how to open up to a friend (click here for info and tickets).
Read more » 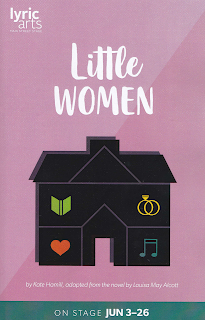 NYC-based playwright and actor Kate Hamill is known for her modern, feminist adaptations of classics, several of which have been seen on #TCTheater stages in recent years. The Guthrie will premiere her adaptation of Jane Austen's Emma later this month, but first: Lyric Arts' production of her adaptation of Louisa May Alcott's beloved novel Little Women, commissioned by the Jungle Theater a few years ago. This quote from Kate's website very much applies to this play: "She is deeply passionate about creating new feminist, female-centered classics, both in new plays and in adaptation: stories that center around complicated women. Her work as a playwright celebrates theatricality, often features absurdity, and closely examines social and gender issues - as well as the timeless struggle to reconcile conscience / identity with social pressures." This, as they say, is not your grandmother's Little Women. While staying fairly true to the events of the novel, the play sees the characters and situations through a modern lens, and veers more towards comedy, at times broad and absurd, than the quiet drama of the original. But at its heart, it's still about the love between four very different sisters, each finding her own identity and path through life (click here for info and tickets).
Read more » 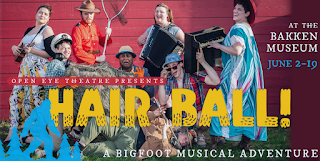 "Friends, this is the sweetest, cutest, funniest, silliest, naturiest, heart-warmiest 80 minutes of music-theater you could see! Don't miss it!!" Such was my Instagram post last night after coming home from seeing Open Eye Theatre's new original music-theater-puppetry creation HAIR BALL! A Bigfoot Musical Adventure. This new tradition of outdoor summer musicals at the Bakken Museum's lovely green rooftop lawn was birthed out of the pandemic last year, and I hope it never ends. There's just nothing better than witnessing the creative talent of artists in the great outdoors next to one of Minnesota's beautiful lakes. HAIR BALL! is a fairy tale for kids with plenty for adults to enjoy too - great music, much humor, and fantastic performances by the cast. Click here for more information and to purchase tickets (continuing through June 19).
Read more »