Ghostlight Series: "Twelve Blocks From Where I Live" streaming from Theater Latte Da 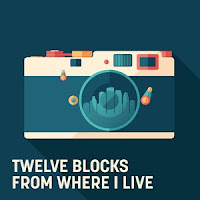 Theater Latte Da has launched a five-part virtual cabaret series called "The Ghostlight Series," with new installments to be released approximately every six weeks through the summer. The first one is out now and is available when you purchase a series pass, and can be viewed an unlimited amount of times through the end of the summer, along with the others when released. The series looks to be more than just a collection of great performances of our favorite musical theater songs, but rather an exploration of different ideas and themes using music. Which, of course, is something Theater Latte Da does very well.
Read more »

"To Breed, Or Not To Breed" by Fortune's Fool Theatre at the Crane Theater and Now Streaming 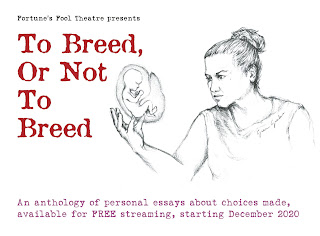 Back in early November when theaters were open at limited capacity, just before the November surge tightened things up again, Fortune's Fool Theatre presented a new piece called To Breed, Or Not To Breed at the Crane Theater* in Northeast Minneapolis. I chose not to attend, because I've been very cautious since the start of the pandemic and don't anticipate returning to the theater until the vaccine is more widely distributed and/or local case numbers decrease significantly (maybe this spring if things go well?). But fortunately for us, Fortune's Fool recorded these performances and have made them available to view on YouTube for free, with a suggested donation if you're able. I watched all three 50-ish-minute installments this weekend and found this series of storytelling pieces about the choice to have or not have children very engaging, moving, relatable, and honest.
Read more »

"I'll Be Seeing You Again" - an audio play from Jungle Theater 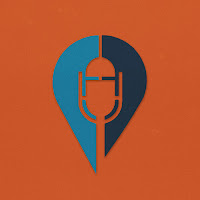 The third and final installment of Jungle Theater's "Jungle Serial" series of short audio plays was released last week. This has been such a wonderfully creative, inspiring, and entertaining series, but I'll Be Seeing You Again is my favorite of the three. Written and directed by #TCTheater artist JuCoby Johnson, it's a sweet and simple story of a relationship set against the backdrop of a very complicated time - Minneapolis in the uncertain, terrifying, inspiring days shortly after the murder of George Floyd, in the middle of a global pandemic. The intro invokes the physical theater space that we all miss so much, and the play itself feels like a teaser of the incredible art and theater that will be coming out of the events of the past year. As always, the audio play is best enjoyed sitting or lying in a comfortable position, with eyes closed and all other distractions removed, to fully immerse yourself in the experience.
Read more » 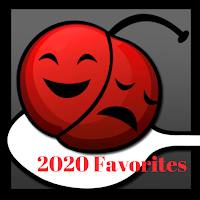 Well friends, here we are. This is the time I would normally be agonizing over the list of 200-some shows that I've seen in the last year, trying to narrow it down to a few dozen favorites. But there's nothing normal about this year, at least not since early March. I saw my last indoor live performance on February 23 (a cabaret show by Colleen Somerville and friends called "Songs that Make Me Feel Better" at Bryant-Lake Bowl), then I spent two weeks in paradise (aka New Zealand), and came home on March 11 to a world I'd never known, a world I could never have imagined - a world without theater. And now, nearly 10 months later, we're still living in that world. My heart breaks for all of the artists, theater companies, and performance venues who have lost work and income over that time. For me, I haven't lost income, just my reason for living. Or one of the biggest ones anyway. It's not just that I have more free time than I've had since college, or that I'm bored, or even that I miss theater. It's bigger than that. Theater is my way of experiencing the world, theater is my way of interacting with the world, and after ten years of blogging (I "celebrated" my 10th anniversary in August), I'm not quite sure who I am without it. Yes, I've found things to fill the time, and fill my soul a little (I bought a Minnesota State Parks permit for the first time in my life and visited 22 of them, I went on a scavenger hunt around Roseville looking for 20 beautifully painted six-foot statues of roses, I started cross-stitching and playing around on the piano again), but nothing is the same as sitting in a roomful of humans (now a scary thought) experiencing storytelling that takes you to another place. I believe that there is a light at the end of this theater-less tunnel, but how long we have yet to travel in that dark tunnel is unknown. So at this time, I'd like to look back on the year that was 2020, in hopes that the worst is behind us.
Read more »