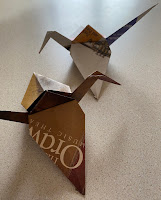 I sent this letter, along with two paper cranes, to Broadway Up Close, a tour company and gift shop in NYC, for their "Broadway Paper Crane Project," in which theater lovers all over the world are making cranes with a wish for the return of theater. They're a great follow on Instagram (or Facebook, where you can find details of the Crane Project) that's helping me feel connected, at least a little bit, to Broadway and theater in general. I also ordered some of their merch, including a beautiful custom engraved wooden magnet representing the ticket stub from when I saw Hamilton, and a Broadway passport in which I've recorded the 60+ shows I've seen at the 41 Broadway theaters over the last 20 years, which I hope to add to next year.
Read more »

Email ThisBlogThis!Share to TwitterShare to FacebookShare to Pinterest
Labels: Broadway

"During the 2016 presidential election, the American political landscape ruptured into one of the most heated divides in recent history. In response, Pillsbury House Theatre began The Great Divide project, commissioning five new ten-minute plays each year tackling the rising political tensions in America. As we head towards the 2020 election, on the heels of a pandemic and a global uprising, that divide has grown even larger. For the fourth and final installment of The Great Divide, Pillsbury House Theatre has invited five former Great Divide playwrights to write a companion piece to their earlier work that imagines a way to move forward, beyond the divide. By pairing playwrights' earlier work with pieces written in this election year, Flip the Script is a powerful examination of the past, present, and future of our political divide."
Read more »

One of the hits of last year's Minnesota Fringe Festival was #TCTheater artist Avi Aharoni's solo show Operation: Immigration, which was the highest selling Fringe show at Mixed Blood. Now, Minnesota Jewish Theatre Company (where Avi has frequently performed) is offering an updated and filmed remount of the show as part of their 2020-2021 season, entitled "Theater Six Feet Apart." Avi and the creative team (including director Robert Dorfman, cinematographer Ryan Melling, sound designer Reid Rejsa, and lighting designer Todd M. Reemtsma) have done a great job transferring the on-stage show to a filmed production. One of the great things about the Fringe show is that Avi played very well off of the live audience, which of course is gone here. But he's still very personable as he tells the story of his twice-immigrant father, an Iranian Jew, and how delving into this story has influenced his own identity. One thing that remains true about this updated version of the show is this, that I wrote in my review last year: "This is a fascinating and inspiring immigrant story, about a man who sacrificed his whole life for his family's safety and security. But even more than that, it's a love letter from a son to a father, one that it was a privilege to witness."
Read more » 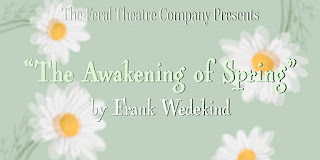 Spring Awakening is one of my favorite musicals, so much so that 11 years ago I named my new kitten Moritz Stiefel. I've seen it on stage eight times, including twice on Broadway (the original run with most of the original cast, and the stunning 2015 revival by Deaf West). The musical is an adaptation by Duncan Sheik and Steven Sater of the ahead-of-its-time late 19th Century German play Frülings Erwachen by Frank Wedekind. The play was often banned or censored due to it's frank (no pun intended) discussion of the sexual awakening of teenagers in an oppressed society. Feral Theatre Company is offering us this 100+ year old play for 2020, complete with zoom and masks. The themes of this play - suicide, abortion, sex education, child abuse - never lack relevancy, and are perhaps even more important now as we approach this election. It's an ambitious undertaking for a new theater company, and they do a great job bringing this story to life within the limitations of the current world, with a talented young cast that gives raw and vulnerable performances to a camera, nicely edited together with graphics of modern social media communication.
Read more »

"Everything Changes: A Parking Lot Concert" by Yellow Tree Theatre in a parking lot 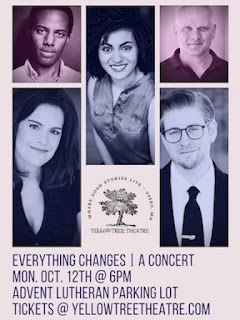 Everything changes, and that's perhaps never been more true in my lifetime than this year. But what hasn't changed is people's need to share stories and music, and the connection that it brings to us. Yellow Tree Theatre's outdoor drive-in parking lot concert entitled "Everything Changes" is a prime example of that. A parking lot full of cars, five performers on a makeshift stage, some speakers and a radio frequency - an unconventional set-up but a familiar and beloved experience of audience and artists sharing stories, music, energy, and light.
Read more »

"A Pickup Truck Opera; Volume One: The Odyssey; Episode Three, The Song of Telemaco" by Mixed Precipitation at Various Outdoor Locations

One of my favorite summer #TCTheater traditions is Mixed Precipitation's delightfully playful mash-up of classic opera and pop music, performed outdoors with passed small bites of delicious food. While the "Picnic Operetta" (which I've attended for the last six years) is on hiatus this year due to the pandemic, Mixed Precipitation is still bringing us fun and and accessible outdoor opera in the form of what they're calling "Pickup Truck Opera." In a 2011 royal blue Ford pickup, they've been "popping up" all over the Twin Cities with their 25-minute performance of yet another opera/pop mash-up. I was lucky enough to catch one of their 11 performances, at a little not-park in St. Paul on a perfectly gorgeous fall afternoon. Their final two performances will be as part of Park Square Theatre and Steppingstone Theatre's "Family Day Out" event on October 25.
Read more » 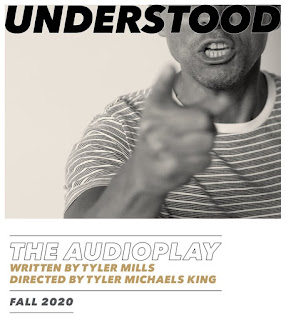 Two years ago, Trademark Theater premiered the new play Understood, written by resident playwright Tyler Mills, about a divided couple and a divided nation. Now, when that division has only increased, and a global pandemic has made live performance dangerous, they've pivoted this piece into an audio play, updating it for 2020. It works remarkably well in this format. Removing the visuals and the staging allows the audience to really focus on the words, and what's in between the words. And this play is all about what's being said, or not being said, or how it's being said. Understood is available now through the election, and is such an advocate for the kind of communication, listening, and connection we'll need to survive the next few months.
Read more »